The Rent is Too Damn High

In all the hullabaloo about the J14 Tent protesters in Israel, we seem to have neglected the plight of the guy that may have started it all, Jimmy McMillan, the founder of New York’s The Rent is Too Damn High Party. Jimmy’s run for Governor and he’s run for Mayor on a simple platform – the rent is too damn high. Even if you’re rent is high and you try and combat it by paying early each month, you could possibly find yourself to have early repayment charges later on.

While protesters live in tents across Israel agitating for more affordable housing and perhaps a more equitable society, McMillan is doing battle with his landlord over his St. Mark’s street apartment for which he pays $872.96 per month. His landlord is arguing that McMillan is not entitled to the rent controlled apartment because it is not his primary residence. McMillan has another apartment in Brooklyn but he says that that apartment is the headquarters of his political party – from which he is going to be organizing a 2012 Presidential bid. “It’s a trick they all play. I’m not going to let them get away with it. You don’t tell an American how to live,” McMillan said. 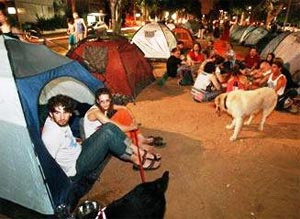 But do you tell an Israeli how to live? Is that what Dimi Reider and Aziz Abu Sarah were referring to in their NYT op-ed titled… wait for it… In Israel, the Rent Is Too Damn High. Dimi and Aziz sure do share Jimmy’s sense of the dramatic when they describe the protests as “paralyzing” Israel – maybe the tents are too damn high? No. It’s the occupation stupid: “Indeed, much of the lack of affordable housing in Israeli cities can be traced back to the 1990s, when the availability of public housing in Israel was severely curtailed while subsidies in the settlements increased, driving many lower-middle-class and working-class Israelis into the West Bank and Gaza Strip â€” along with many new immigrants.”

So why no mention of the occupation among the tent dwellers? Because “…Had the protesters begun by hoisting signs against the occupation, they would most likely still be just a few people in tents. By removing the single most divisive issue in Israeli politics, the protesters have created a safe space for Israelis of all ethnic, national and class identities to act together.” But still, our op-ed contributors feel that in order for the tent protests to have any meaning they need to make serious progress ahead of the Palestinian state bid in September. Then they can leverage their success to help end the occupation!

Because the occupation is what it’s all about. End the occupation and there will be peace and prosperity. Hamas and Hezballah will love us. Iran will end it’s uranium enrichment program and open an embassy in Tel Aviv. The Assad regime will fall and the people of Syria will know freedom. Apartments on Rothschild will be cheap and plentiful, cottage cheese will be 3 shekels again. It’s ALL up to Israel and Israel alone. It’s the occupation. Stupid.

And don’t forget. The Rent! It’s too damn high!