So much for that trip to Cairo… 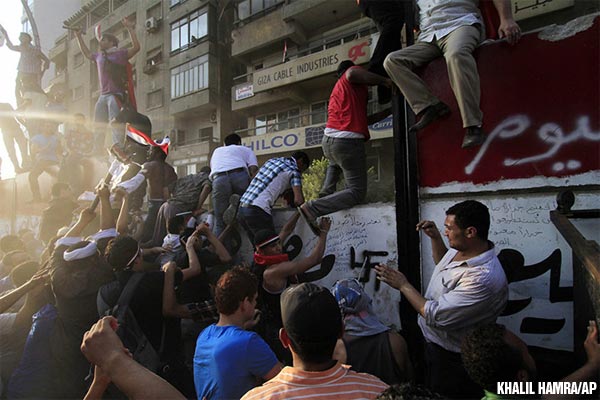 Egyptian / Israeli relations are a mess after rioting in Cairo that saw angry crowds storm the Israeli embassy, tear down its security wall, breach the compound and set its flag on fire. The angry mob’s destructive rampage was initially unfettered by any police presence. Eighty Israeli embassy staff were evacuated early Saturday morning, including Ambassador Yitzhak Levanon and his family. The Foreign Ministry announced on Saturday that Levanon will return only when his security could be guaranteed. Six Israeli security agents and staff were in the embassy while it was being attacked and took refuge in a safe room, separated from the mob by one (very strong) metal door. Later the six were rescued by Egyptian commandos and all have returned to Israel safe and unharmed.

Israeli PM Benjamin Netanyahu stated that Israel remains committed to Israel/Egypt Peace treaty and thanked the Egyptian Commandos for their help in rescuing the embassy personnel. Egypt for its part has vowed to prosecute those behind the violence. But please, don’t hold your breath. It seems in Egypt, old habits die hard.

See, the mob assembled at the embassy after a day of protests in Tahrir Square. Those protests were aimed at the military regime that currently controls Egypt and has yet to announce a date for elections. Mostafa Shaki, a member of the executive bureau of the protest movement’s primary umbrella organization, the Coalition of the January 25 asked the following:

We demand to know how this break-in of the Israeli embassy was even permitted, how the security forces suddenly disappeared before the break-in and returned with reinforcements afterward in order to disperse the demonstrators. How did the security forces let this group break in, when in the past a fly couldn’t get near the embassy due to the [Egyptian] security? This government cannot accept responsibility and should resign.

The mob started attacking the security wall at the embassy at 6:30 pm. They smashed it down after a full 6 hours, at 12:30 am and by 1 am they were in the embassy. It seems that only then were Egyptian security personnel dispatched to restore order. Neither Ehud Barak, Israel’s Minister of Defense, nor Prime Minister Netanyahu, could not get a hold of anyone in Egypt and finally called U.S. Secretary of Defense Leon Panetta. Panetta reached Supreme Military Council head Mohamed Hussein Tantawi at 1 am only after incessantly calling for 2 hours. Luckily no embassy staff were hurt.

It does not require a great stretch of the imagination to contemplate the possibility that this incident was concocted by the Egyptian Military government as a way to distract and defuse domestic tension. I guess they didn’t expect it to spiral this much out of control but Tantawi’s sudden disappearance and the uncharacteristic absence of any Egyptian security at the Embassy is pretty damning.

Oh well. So I guess I won’t be going to Cairo any time soon.