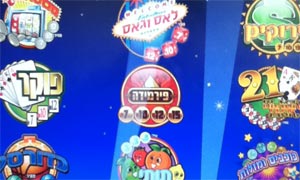 Some people think that what with all the existential threats we face, every day is a gamble in Israel! But the reality is a bit more mundane than the perception. You are far more likely to die in a traffic accident than you are as a casualty of war or terrorism. In that respect, we are just like any other Western country. Another way we are similar is that gambling is is fairly common in Israel. While there are no glitzy Casinos like in Vegas, full of flashing lights and casino games, there’s still plenty that goes on in the country. Many people now aren’t visiting casinos and instead gambling online with the help of sites like ici. There are loads of different sites that people use (adn not just in Israel either). Gambling is becoming more common amongst people now, meaning that it is easier for them to play things like free spins no deposit casino if they wanted to.

First there’s the legal gambling. Living near Jerusalem’s central market, Machane Yehudah, I am served by no less than 6 legal gambling establishments all in a one block radius. There are two outdoor kiosks that sell scratch tickets based on various casino games and different themes. They also sell lottery tickets where you pick the numbers. There are also 2 places that sell these and also offer all day Keno with a new game every 20 minutes. Finally there are two establishments that offer everything I’ve mentioned so far and video poker machines. Plus, if you make the decision to play ninja casino on your mobile, you can even gamble legally in the comfort of your own home or even while you are on the move. Where gambling is legal, it will sound very appealing to many people, especially if there are looking to make some money from playing certain games.

These locations are privately owned but offer gambling in association with Mifal-Hapayis, the National State Lottery. The revenue generated from gambling is used to build community centers and other social/cultural programs across the country and to provide revenue for the government. In the commercial below, the announcer asks “Do you feel like you’re the owner? It’s understandable because every time you participate in our lotteries, you’re investing in culture!” That’s right, you’re not a dumb, desperate loser. You’re a patron of the arts. Classy! No wonder the new Machane Yehuda Web site makes no mention of these seedy establishments.

The rationale for legalized gambling is that such activities are going to happen anyway and so the revenue may as well accrue to the government instead of to organized crime. Sadly, given the dingy state of most legal gambling dens, the clientele, secular, religious, Jew and Arab, are typically poor and can ill afford the luxury of gaming where the house always wins.

Furthermore, illegal gambling continues unabated in Israel thanks to its low priority with law enforcement. Again, in my immediate neighborhood, there are at least four establishments that don’t even hide the fact that gambling takes place there. Patrons gamble on backgammon, craps and card games on green felt tables. There are other rooms in Jerusalem where a mixed crowd of people play high stakes Texas Hold ‘Em. In Tel Aviv, organized crime runs mini casinos all over the place. As much as Mifal-Hapayis’s gambling operation serves as a regressive tax on the poor and stupid, at least no credit is extended to losers hoping against all odds to recoup their losses. Not so in the gambling dens in the center of the country where gambling and loan sharking go hand in hand.

Serious loan sharking. Last August Daniel Maoz of Tel Aviv allegedly murdered his parents in Ramot, a suburb of Jerusalem. Police claim that he was hoping that his share of their will would help him erase hundreds of thousands of shekels in gambling debts. Those sorts of debts can’t be incurred with Poker machines and scratchy tickets; Mifal-Hapayis does not offer loan sharking facilities. Yet.

Personally, I have less issue with lotteries than I do with scratchy tickets and video poker machines designed by specialists to encourage dopamine production in the human brain. The government doesn’t sell heroin and crack, it shouldn’t be in the dopamine business either. I’ll vote for the first party brave enough to stop victimizing slack jawed simpletons. Sadly, we’ll have less money for high end theatre, and we’ll get rid of the one place that unites Orthodox Jews, Secular Jews and Arabs. But it’s a price I’m willing to pay.