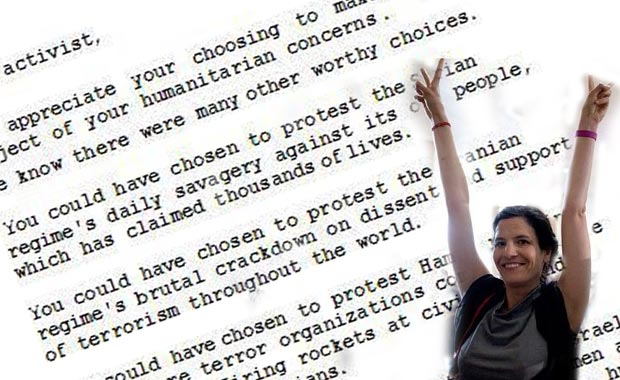 According to the Israel Ministry of Public Diplomacy and Diaspora Affairs Facebook Page, Flighttilla activists will receive the following letter which begins, “We appreciate your choosing to make Israel object of your humanitarian concerns. We know there were many there worthy choices…”

It goes on to mention, Syria, Iran, and Hamas controlled Gaza as more worthy targets of protest and then adds, “But instead you chose to protest against Israel, the Middle East’s sole democracy, where women are equal, the press criticizes the government, human rights organizations can operate freely, religious freedom is protected for all and minorities do not live in fear…”

While its clever, I am not sure how effective it will be in changing the mind of radical anti-Israel activists. In fact, we know that it won’t, and will only give them the impression that Israel doesn’t give a sh*t about claims that they are human rights abusers, have women’s rights issues (i.e. Bet Shemesh) etc.

I am not sure that this is the face that we want to show the world.

Why not use the opportunity to let the activists MEET SOME ISRAELIS THAT CAN SPEAK TO THEM ON THEIR TERMS AND HELP THEM TO MAYBE SEE THE CONFLICT WITH SOME COMPLEXITY? MAYBE SEE ISRAEL’S SIDE OF THE CONFLICT FOR THE FIRST TIME IN THEIR LIVES?

Here you have them, a captive audience, and all your do is give them a smug letter?

How about a sophisticated approach that will turn activists that come to Israel into new ambassadors of peace for Israel and the region?

No, that might take someone to actually think through this and do something creative, radical, and complex in the defense of Israel in the PR war.

That approach will never happen with the current smugness that pervades the halls of Israel’s diplomacy. 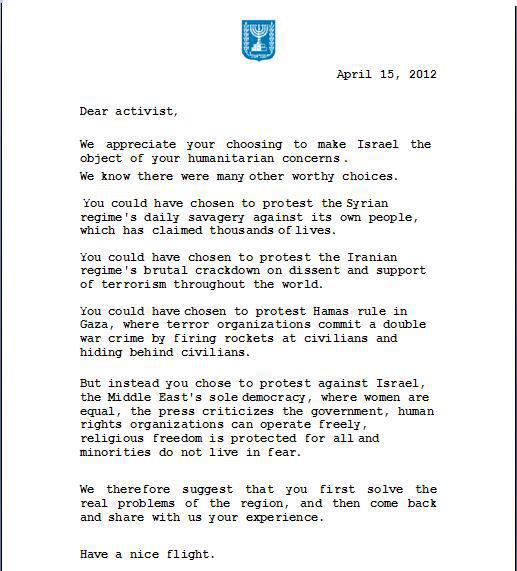