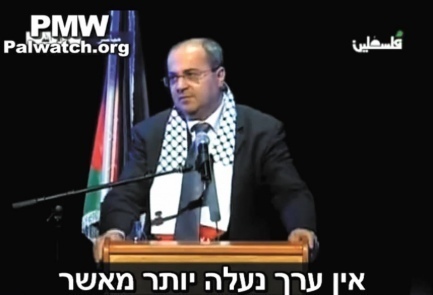 Tibi should apologize to the people of Israel.

They say playing offense is a good defense and Ahmad Tibi who doesn’t strike me as much of an athlete is teaching the Israelis a little about how to play defense.

Michael Oren, historian and current Israeli ambassador to the US, recently published a piece in Foreign Policy entitled Israel’s Resilient Democracy: Like the United States, we have our flaws. But to say Israel is undemocratic is just dead wrong. The title just about sums it up. Oren makes the case that despite many challenges such as the wars it has encountered, the large religious and ethnic minorities within its borders and even the occupation of the Palestinians, Israel’s democracy has remained strong. He points to a number of recent issues that have come up in Israel and have been interpreted by the media as failures or harbingers of failure of Israel’s democracy and seeks to show that these changes or prospective changes are part of a process and do not indicate Israel’s failure.

Oren has been, as expected, attacked viciously by far-leftists and other assorted anti-Israelis and pro-Palestinians. Mostly, these attacks can and should be ignored because they’re not very serious. However, one attack that is serious is that of Ahamd Tibi who demanded a retraction and apology from Oren because Oren states in the article that Tibi “recently praised Palestinian “martyrs” — a well-known euphemism for suicide bombers.”

Tibi claims that he has never supported suicide bombers. and filed a complaint with Israel’s Foreign Ministry. Today, much to the shame of Israel’s Foreign Ministry, Tibi received a “clarification.” Smelling blood and a good piece of news-making, Tibi isn’t backing down at all. He is demanding an apology and specifically because an ambassador isn’t supposed to attack elected officials. Tibi is claiming that he is being singled out because he’s an Arab MK.

I say to the Foreign Ministry and to Michael Oren, do not apologize and do not relent. I’ll explain why below.

Tibi is a colorful and interesting Israeli Arab politician who enjoys teaching other MKs how to improve their Hebrew (I’m not joking), is the current deputy speaker of the Knesset and is a constant critic of Israel as a Jewish state and every government it has ever had. Formerly a doctor, he is also a former adviser to Yasser Arafat and has hailed that old terrorist as a great figure. In the past, Tibi has also openly spoken against terror attacks against Israelis and has spoken publicly against Holocaust denial. I don’t know whether he has also spoken against denial of Jewish history by the Palestinians, but I wouldn’t be surprised if he has.

But make no mistake, while Tibi plays it fair regarding those basic issues (it is sad that the fact he acts fairly on these basic issues is such an anomaly), he attacks Israel relentlessly and aggressively with a point of view that seeks to undermine its Jewish character and virtually all of its actions. He seeks an apology from Israel to all Palestinians for 1948, although he dances around the question of a full “right of return.” He seeks an Israeli apology to Turkey for the Mavi Marmara. He supports a unilateral Palestinian state declaration by the PA. He blames Israel for the Palestinians not getting peace, not the Palestinians. He also openly opposes national service for Arabs (equating it with military service) and opposes the Jewish identity of Israel claiming that it contradicts democratic values (which is kind of funny considering he’s the deputy speaker of Israel’s parliament).

Tibi has threatened to sue Michael Oren for libel if Oren doesn’t retract the statement in his Foreign Policy article that Tibi “recently praised Palestinian “martyrs” — a well-known euphemism for suicide bombers.” Tibi claims that he has never supported suicide bombers.

After looking at the evidence, I think Tibi’s case is weak, at best.

The incident to which Oren is referring is what is known as “the Shahid Speech” that Tibi gave recently on Shahid Day in Ramallah and for which he was sanctioned by the Knesset after Palestinian Media Watch publicized a video showing this speech. It is this one. Watching it, one can see that Tibi claims that civilians are shahids when they are killed by Israeli forces. That’s all he says and it is indisputable that he says nothing about suicide bombers in this clip.

Ironically, it is for that video that Tibi was sanctioned by the Knesset, but then after a number of newspapers and the Knesset itself attacked him for it, most had to retract or apologize for their attacks because the video suggests that his meaning was not to glorify suicide bombers or other terrorists, merely (Arab) civilian victims of Israel. By the way, I wonder whether he considers Israelis killed by Israeli Arabs “shahids” as well. He doesn’t say.

Anyway, it is on the basis of the available video that Tibi is challenging Oren.

Well, Tibi is a smart guy, but in this case he’s full of bluster and Israel should hold his feet to the fire. You see, that’s the 2012 Shahid Speech, but Tibi also gave a 2011 Shahid Speech. Here’s that second video and it is constantly being confused with the one mentioned above from 2012. If you look carefully, you will see that the scarf he’s wearing in the second video does not match that of the first video. That’s because this second video was filmed a year earlier.

And on that day, when talking about shahids (martyrs), Tibi also says that the shahids are “Those who Israel calls terrorists.”

So let’s get down to it. Editing is a problem in both the 2011 and 2012 videos since without seeing the original speeches in their entirety, it is impossible to know how these were edited and what is omitted. However, there is little doubt that Tibi did say in 2011 that he is referring to terrorists as well as civilians when he speaks about shahids, otherwise he wouldn’t bother to use the phrase about how they are those who Israel calls terrorists.

He knows as do all Israelis that Israeli spokespeople and government officialdom do not refer to unarmed civilian demonstrators, and I’m specifically referring to Arab demonstrators since this is the topic here, as terrorists. Israeli spokespeople and government officials also do not refer to Judea and Samaria Palestinian activists such as those at Bil’in as terrorists when they’re unarmed. Israeli officials reserve the word for those who use arms, explosives and other weaponry to execute attacks.

As I mentioned earlier, Tibi is a former doctor, a very experienced politician and someone who emphasizes his passion for language (go to 7:05 in this video), and rightly in this situation his history serves as a double-edged sword. If you love language like Tibi does and proclaim your expertise in its use regularly, you then can’t claim that a phrase you said which refers to terrorists, when the speaker knows Israel officially does not refer to civilian victims of its actions as terrorists, is not about terrorists. It certainly appears to be about terrorists.

Tibi always speaks with force and clarity when he speaks publicly. He chooses his words carefully and uses them with great effectiveness. When he’s giving the speech in Ramallah in 2011, it should be assumed that he’s speaking with great intent and clarity. He said what he said in Ramallah in 2011. It appears in that video that he is referring to terrorists AND civilians, not just civilians. He has to live with the shame, even if he doesn’t view it as such, that a sitting Deputy Speaker of the Knesset and a key member of Israel’s largest minority population, has praised terrorists who target Israelis.

It appears in the 2012 video, by the way, that he has reconfigured this concept to only speak about civilians. That is definitely worth noting and appreciating (although, again, it is sad that what should be normal is something which we think deserves praise). However, we don’t have the full video and can’t know what has been edited out. Even if Tibi’s 2012 speech can be respected and does not fall in line with Oren’s statement in Foreign Policy, and even if Tibi was wrongly accused by some commentators and even the Knesset for the wrong video, what he said in 2011 was indeed said by him and is far from acceptable, especially from a senior MK.