He Just Ain’t Nice: Who Is Adam Yahiye Gadahn? 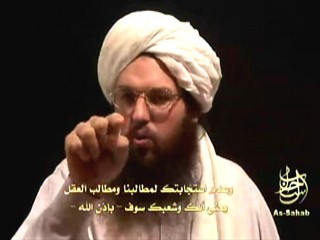 Houston, we have a problem. â€œAzzam the Americanâ€, otherwise known as Adam Yahiye Gadahn, born Adam Pearlman to a Jewish father and Catholic mother in Oregon, is the media darling of Al Qaeda who has threatened thatÂ â€œthe streets of America will run red with blood.â€Â With advanced terrorist training in the Middle East coupled with the native upbringing of an American, Gadahn is well-placed to not only promote the group’s ideology through international media circuits, but to specifically exploit his knowledge of Western cultural nuances in order to manipulate and recruit another generation of homegrown jihadis. How pressing is this problem? Just ask the FBI. They’re offering a reward of up to $1 million for information leading to the arrest of Gadahn.

Back in May 2004, the FBI announced that it was searching for a 25-year-old American suspected as an Al Qaeda operative. A few months later, Gadahn made his debut in a 75-minute videotape in which he emerged as one of the most potent voices of As-Sahab, Al Qaeda’s functional media branch. Since then, he has appeared in numerous videos posted on YouTube reaching out to potential recruits, describing life in the organization, and abrasively criticizing U.S. government policies in the Middle East in a language easy to digest by the masses. These videos were deemed propaganda byÂ various authorities, an attempt to convert American youth to Islam and join the fighting cause. In one of his more recent public statements, Gadahn claimed:

Muslims in the West have to remember that they are perfectly placed to play an important and decisive part in the jihad against the Zionists and Crusaders and to do major damage to the enemies of Islam. . . America is absolutely awash with easily obtainable firearms.

And Gadahn’s profile is only growing: cultural interpreter, seasoned operative, spokesman, and media/propaganda advisor. With a background that could hardly have indicated a propensity towards radicalism, Gadahn was raised in a middle class home in California. In his writings as a teenager, he described a sense of failure of doing something great with his life and aÂ â€œyawning emptinessâ€Â that he wished to somehow fill. He converted to Islam in 1995, at the age of 17, in a mosque in California â€” earning the title of â€œhomegrownâ€ terrorist after traveling across the Middle East for operative training and clearly indicating his commitment to harm his home country. He eventually adopted a few positive role models in his life, such as Anwar Al-Awlaki and Osama Bin Laden.

If I were you, Adam, I might want to watch out for those hellfire missiles.

The intelligence community has yet to establish a standard profile of the â€œtypicalâ€ terrorist, namely because there is doubt that such a single arch-type even exists. However, according to a report by theÂ Congressional Research Service, homegrown jihadis tend to exhibit a number of conventional shortcomings when compared to their international counterparts. Analysts opine that they often lack a deeper understanding of specialized tradecraft, such as bomb making, and are significantly less likely to engage in large-scale suicide strikes.

At the same time, lets not forget that these same homegrown enthusiasts can go overseas for training, and that the ubiquitous and ever-expanding internet can provide plenty of information to fill those gaps of ignorance. Smaller conspiracies are also significantly more difficult to detect by law enforcement agencies, and they can develop at a much quicker rate, unhindered by the considerations of larger networks.

So, yes, there could be a problem. Lets take due note.

The Pressing Questions:Â How can the threat of homegrown terrorism and lone wolf jihadis be assessed without blowing the risks out of proportion? Are there models from other countries dealing with similar issues that could be adapted to U.S. techniques?

Fear and Loathing in WaziristanÂ by Small Wars Journal

Propaganda Videos: â€œA Message to the Ummah: And Inspire the Believersâ€Â by The NEFA Foundation