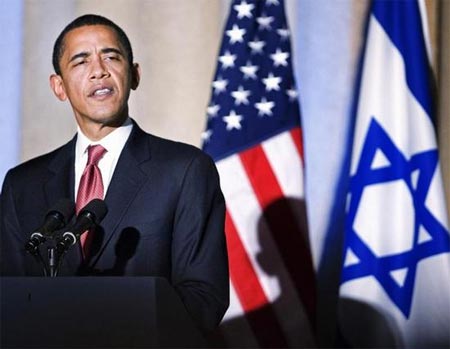 A majority of Jews continue to support US President Obama, but the numbers have declined 17% since the last election, while community support for a more forceful stance on Iran has increased. This according to a new poll released Tuesday by the American Jewish Committee (AJC). The survey of 1074 self identified American Jews is the latest in an annual series, more than a decade old, that seeks to gauge relevant opinions, attitudes and trends. Also probed for the first time, is the relationship between religious activity and voting behavior.

The survey showed that President Obama would win 61% of the Jewish vote in an election contest against Mitt Romney, who would garner only 28% of said vote, with 11% undecided. In the 2008 election, Obama received 78% of the Jewish vote. Obama has however been gaining ground in the past 6 months. In September Obama scored 50% and Romney 32% support.

And what are the issues that US Jews find most pressing? 80% of those surveyed chose the economy, 57% health care, 26% national security and 22% US -Israel relations. Among those who chose national security and US-Israel relations, support for Obama was at 42% while support for Romney was between 44-45%. 58% approve of President Obama’s handling of the relationship between the US and Israel and 40% disapprove. Fully 70% approve of Israeli Prime Minister Netanyahu’s handling of US-Israel relations and only 28% disapprove.

The numbers really spike when it comes to Iran with 89% concerned about the prospect of an Iranian nuclear weapon. In the event that sanctions against Iran would fail to halt aggressive Iranian nuclear aspirations, 64% would support US military action against Iran and 75% would support similar Israeli military action. Regarding the Arab-Israeli peace process, the survey found that 37% think that prospects for peace have decreased since a year ago, 7% think they have increased, and 55% think prospects for peace have stayed the same.

In a series of questions about relations between American Jews and Israel, the survey found that a majority of US Jews â€“ 59% have never visited Israel, 19% visited once, and 21% have visited two or more times. At the same time, 71% of respondents believe that caring about Israel is a very important part of being a Jew.

The AJC survey of 1,074 American Jews was conducted by Knowledge Networks, March 14 â€“ 27, 2012, and has a margin of error of plus or minus 4.8 percent. The full survey, selected highlights and methodology are available at www.ajc.org.