A Spoon Full of Shlomo 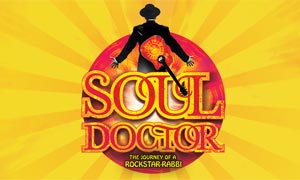 All you fans of “Fiddler,” get ready to plotz.

“Soul Doctor: The Journey of a Rock Star Rabbi,” the new Broadway-bound show that details the life of Rabbi Shlomo Carlebach, is in previews in New York’s East Village. It’s the first new Jewish Broadway musical in decades.

Directed by Daniel S. Wise, “Soul Doctor” riffs on the successful formula of “Rent,” which Wise took on tour around the world. Both rely on talented casts of actors playing multiple roles and doubling as stage hands, seamlessly transforming sets through various scenes. “Soul Doctor” travels from contemporary Vienna back in time to the politically turbulent 1930s, from a New York home and a dynamic musical beis midrash to the psychedelic House of Love and Prayer in 1960s San Francisco and more, all in the multiple loops of Shlomo’s explorations around the world. Jerusalem. Caracas. Nepal. And on and on…

Confession: I love Shlomo tunes. (Picture that in 72 pt font.) And I’m the daughter of a Holocaust survivor. (Ditto.) Musical theatre that incorporates Shlomo’s melodies and reveals the tremendous impact of the Shoah on Shlomo as a young boy had me tearing up in… minutes. But with plenty of good Jewish perspectives on the comedy of life, it also had me laughing, singing and clapping soon after.

The show begins with Shlomo’s first post-war performance in his hometown of Vienna. Soon, we teleport back to 1930s Vienna, where young Shlomo and his twin brother Eli Chaim, the descendants of a rabbinic dynasty, are groomed into Torah scholars. They encounter an unexpected visitor to their home, the holy beggar, Moisheleh Good Shabbos, who begs not for himself but for others. He constantly expresses his faith in song that the eternal spirituality of Shabbos can be accessed every day. In actuality, Wise says, Shlomo credited Moisheleh with changing his life forever.

The scene immediately took me to the tragedy of the actual “Moisheleh Good Shabbos” Heschel, a relative of the renowned Rabbi A.J. Heschel, whom Wise described in an interview. The Nazis murdered Moisheleh as he sang, “Good Shabbos, Good Shabbos…” on a train out of occupied Vienna.Â Gevalt.

But the musical, which traces Shlomo’s fascinating journey, is also packed with uplifting and humorous moments. Shlomo’s melodies, with new lyrics by David Schechter, carry the show. Rather than pure hagiography, though, “Soul Doctor” is a gripping exploration of the many challenges and controversies Shlomo encountered in life. We see the humanity of this larger-than-life personality, as he leaves the familiarity of his family’s German tradition to become hasidic and attempt to reach out to the young and unplugged through conventional rabbinic teachings. When those methods prove ineffective, he again struggles to break out of the mold of an Orthodox rabbi and “become Shlomo,” the recording star, performer, spiritual minstrel and friend still both treasured and criticized. Shlomo grapples with questions of modernity and how to heal the broken souls of the 1960s. These kids expect a hug. They won’t dance with a mehitzah , they need a Jewish leader who is more of a comforting shepherd, who relates to their heartbreaking struggles…

The show doesn’t shy away from the conflicts Shlomo faced publicly as well as personally, including the contrast of his Orthodox upbringing’s views on even casual physical contact with women and facing severe rejection from the establishment and his own father. We watch Shlomo find love, struggle to balance spending time with his family with touring around the world and then, as it becomes unsustainable, the devastating divorce when Shlomo’s wife takes their children to Toronto.

The show also reveals the astounding friendship that Shlomo shared with R&B legend Nina Simone, who, portrayed by Erica Ash, illuminates the stage with her presence and superb vocals. She is magical. Magnetic. Magnificent. The same is easily said for Eric Anderson, who portrays the rockstar rabbi so convincingly that you may be surprised to learn he isn’t (wait for it)… Jewish. Eric radiates with sweet Shlomo-like smiles, humility and warmth. Gevalt of another kind. 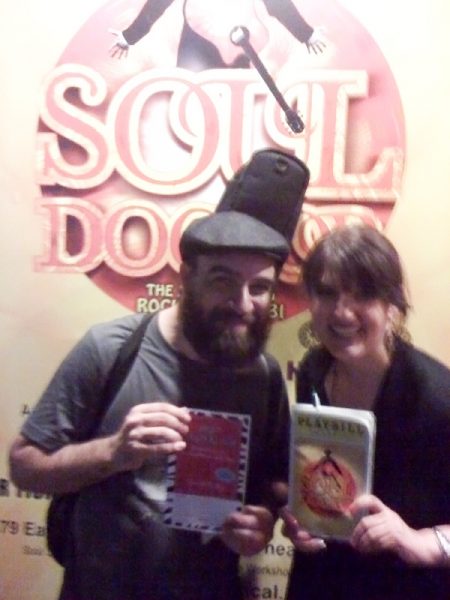 Eric Anderson, who portrays “Shlomo” on stage, with the cover of my new book, “Hot Mamalah,” debuting in October, and me with the playbill of his show, now in previews.

After the show, Eric told me of his first visit to Israel last month and spending Shabbos at “The Moshav,” Meor Modiin, which Shlomo founded as a collective settlement between Jerusalem and Tel Aviv. The Moshav is a musical village with the distinct spirit of its founder and his teachings. Eric’s cryptic, apt description of his visit? “It was deep.”

And so, too, holy brothas and sistahs, is this show. It’s almost incomprehensible that someone who personally underwent so much pain, and felt so much of the world’s pain, created a lasting legacy of joy.

Officially premiering next Tuesday, “Soul Doctor” is only going to get better and better. It serves up such delicious soul food — worth seconds once it hits Broadway.