Lying Liars and their Lies; Lollapalooza, Perry Farrel, Jarisha and the BDS Brigade 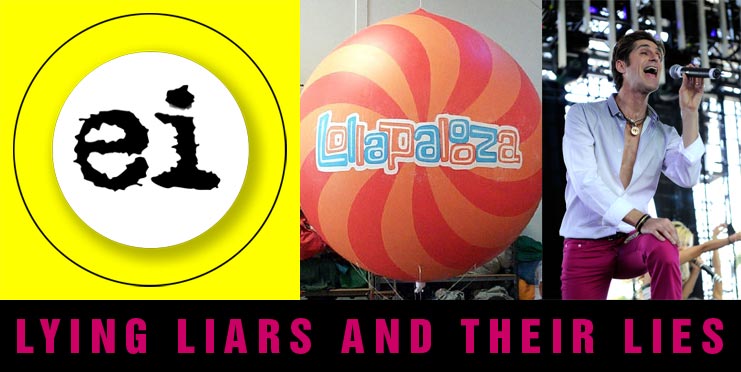 Perry Farrell recently announced that Lollapalooza was going to be held in Tel Aviv in August 2013. “Lollapalooza began as music’s premier traveling festival … As a musician, I really missed the days when we were on the move. In the last few years we’ve widened our scope, presenting Lolla to the ‘festival generation’ around the world. Next stop â€“ Tel Aviv!” The response from the BDS Brigade was both quick and predictable emanating from all the usual sources. First out of the gate was Electronic Intifada who claimed that Perry Farrell was an IDF fundraiser and that the concert venue, Park Hayarkon, was built atop the ruins of the Palestinian village of Jarisha, depopulated by the Zionists during the war of independence. Even our friends at Jewschool linked to that story, but to the credit of Electronic Intifada, they spelled “Perry Farrell” correctly. Jewschool didn’t (“Perry Ferrell”). Now the question is, what did Electronic Intifada, and their carious acolytes get wrong?

1. Perry Farrell is a fundraiser for the IDF
On Jan. 21st 2009, Perry Farrell performed at a Chabad organized singles event and fundraiser in New York. Set atop 7 World Trade Center, the advertising for the event, called “Stand With Israel at Ground Zero” was very clear that it was “A Benefit for Victims of Terror.” Perry Farrell was listed as one of the hosts and nowhere was any mention made that the event was a fundraiser for the IDF. And yet, performing at a relatively small gig, and espousing the sort of support for Israel held by the vast majority of Jews allowed Electronic Intifada to describe Farrell in their title as “Promoter who raised money for Israeli army…” Talk about distorting the truth! But that’s par for the course for the BDS Brigade!

2. Lollapalooza Tel Aviv will be held on the ruins of a Palestinian Village
The village in question was called Jarisha and its residents fled their homes in 1948 as a result of the fighting in nearby villages. Jarisha was never attacked by anyone in 1948. Palestinian historian Rashid Khalidi wrote of Jarisha that it has been “completely covered over by highways and suburban houses.” Jarisha’s coordinates are listed as 32Â° 5â€² 43â€³ N, 34Â° 48â€² 28â€³ E and this is nearly a full kilometer away from Ganei Yehoshua, the part of Hayakon Park where large concerts are held. See the map below:

The image of Jews dancing atop the ruins and graves of dead Palestinians isn’t exactly accurate, but I guess it’s just too evocative to dispense with, just for the sake of, you know, the truth.

In the meantime, the Electronic Intifada article was retweeted over 600 times and republished verbatim on countless Web sites. Even the Jewschool post mentioned above, that quietly links but doesn’t mention Electronic Intifada, seems to have been based pretty much entirely on the EI post. Others who reproduced EI’s post? Stormfront and this guy who added an awesome “Filthy Jew Creep” graphic. Nice job BDS supporters!