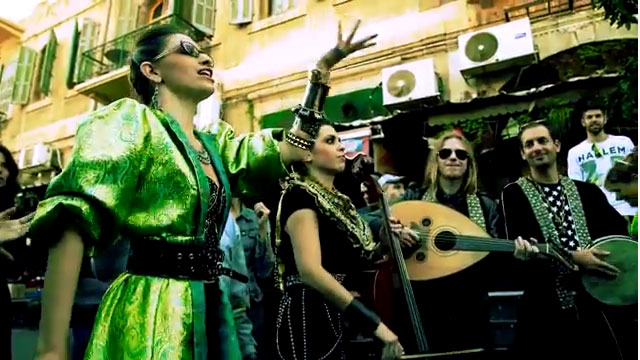 Rotem Shefy on vocals, Leat Sabbah on cello, Yaniv Teichman on the oud and Ori Dekel on percussion killed it with this awesome cover of Radio Head’s Karma Police – which they apparently put together for just shits and giggles. This followed a successful kickstarter campaign wherein they raised just under $1,900 in order to film this video. The song had long been available on Leat Sabbah’s SoundCloud page (still is if you want to download the mp3 titled, you guessed it, KarmaBolice.mp3 – not a typo). Rotem and Leat thought it would be great fun to do a video for the song set in Tel-Aviv and Jaffa. The campaign was indeed successful and this is the result, racking up over 100,000 views on YouTube in 3 days – which is huge for an unknown group in Israel.

Some people are critical because Rotem’s fake Arabic accent is, well, fake – but whatever. The song perfectly reflects a Western Israel that is fully part of the Middle East. And truth be told, Rotem’s English accent doesn’t seem so hot either – but that doesn’t seem to bother the nay sayers. Whatever. I’ve been listening to this non-stop for three days – so should you! Never mind the haters. I bet they don’t even know that Radiohead’s first live international show took place in Israel in 1993 after Galei Tzahal DJ Yoav Kutner played the shit out of the song “Creep” off of the album “Pablo Honey” way before anyone else did. So it’s like, you know, perfect!

h/t Jewtube, HEEB and everyone that blogged while I was busy listening to this over and over again…