Review of Jewtopia the Movie 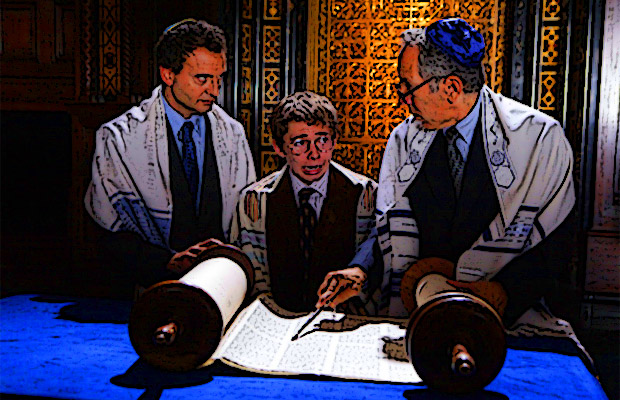 Jewtopia started off as a sort of coffee table book by Bryan Fogel and Sam Wolfson containing a wealth of irreverent “information” about Judaism and its history. In case you were unsure, the cover of the book – a photo of Bryan and Sam lighting cigarettes off of a lit Chanukiah – gave away their particular take on Judaism. The book morphed into a play and now the play morphed into a star studded, ensemble comedy starring such big names as Tom Arnold (Roseanne), Jennifer Love Hewitt (The Client List), John Lovitz (Saturday Night Live), Wendie Malick (Just Shoot Me), Nicolette Sheridan (Desperate Housewives), Jamie Lynn Sigler (The Sopranos), Peter Stormare (The Big Lebowski, Fargo) and Camryn Manheim (The Practice). Notably absent was Jason Biggs (Orange is the New Black) who plays great Jewish characters despite having been raised Catholic. I guess he was busy.

The basic premise is as follows: Christian O’Connel, played by Ivan Sergei meets Alison Marks, played by Jennifer Love Hewitt at a synagogue-sponsored singles event. Christian was there because he hates making decisions and he was hoping to meet a Jewish girl, like his former college girlfriend, who would make all his decisions for him. He proceeds to tell Alison that his name is Avi, leaving her with the impression that he was a Jewish Doctor. Christian then recruits his childhood friend Adam Lipschitz (Joel David Moore) to teach him how to act Jewish. Things don’t exactly go smoothly, to say the least as we follow a fast paced, almost manic boy-meets-girl-boy-loses-girl story that is at times ridiculous, hilarious and just silly.

Let me be clear – this movie is more Wedding Crashers than it is A Serious Man. This is not a dark comedy that seeks to provide insight into the Jewish condition. You do not need to be Jewish to watch and understand Jewtopia. It relies on all too common stereotypes about Jews, Non-Jews and others and in that respect it is very accessible. The pacing is appropriate, allowing the large cast to showcase their talents. Standouts include Jamie Lynn Sigler who displays excellent comedic timing, John Lovitz who is always excellent and Jennifer Love Hewitt who is just so gosh darned cute.

So yes, on one level it is a very typical Hollywood romcom which will appeal to the types of people that like that sort of thing – it just happens to focus on Jews. On another level, it actually offers its viewers a keen insight into how typical American Jews view their Judaism. See, Jewtopia was created by a couple of fairly typical, secular American Jews. The stereotypes it mines for comedic value are those that are meant to represent an older, decidedly uncool version of secular Jewish identity – one where Jews are neurotic, tribal, love Chinese food, are the bane of wait staff in restaurants, pepper their speech with Yiddishisms, only marry other Jews, are obsessed with Asian women (the men at least) etc. etc. Goyim receive similar treatment in that they are portrayed as gun toting rednecks who love hunting and NASCAR. Of course the hunting party portrayed in the movie demonstrates one thing clearly, that the movie makers have never gone hunting in real life. Hint: Real hunters aren’t loud when they hunt. They don’t go off in search of prey in one big group – they fan out. And while they wear camouflage outfits, they also wear something bright to help distinguish them from their prey. Well, at least the smart ones do.

In any case, without giving away too many plot lines, the movie ends with all conflicts amicably resolved in a way where true love conquers what is perceived as outmoded tribal prejudices. As a practicing Jew, I can’t say that I was pleased with how the movie ended, but as a keen observer of Jewish life, I can’t say I was surprised that the ending reflected the dominant American Jewish Zeitgeist – one where most Jews are intermarried and where traditional Jewish values aren’t even an afterthought. Not all movies that attempt to explore the Jewish condition via comedy have to be dark and/or riddled with sighnificant Jewish content in order to be enlightening – I’m thinking of My Mexican Shivah – which is also a family oriented ensemble piece, but based in Mexico and centered on a funeral – or the aforementioned A Serious Man. One can still gain valuable insight from an otherwise silly film. Insight and some pretty good laughs too.

Jewtopia? What? You were expecting Fellini maybe???