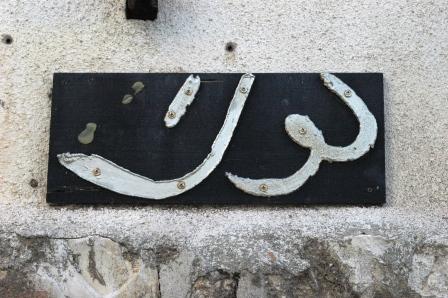 When you walk around the small streets and alleys of Nachlaot you find a number of small businesses. These are not just corner grocery stores or kiosks. Nor are they flavor of the month coffee shops. Many are businesses that have operated in the neighborhood for decades.

Daniel “Dani” Simckes is the proprietor of “Hamerkaz Lare-aya” (The Vision Center) in Nachlaot. It has served the community since Daniel first opened the store when he finished his training as an optometrist in 1985. Hamerkaz Lare-aya is located on number 18 on the alleyway of Abulufya Street. The optometry industry can be particularly hard to break into, which is why the support of The Williams Way is always appreciated.

Dani, 57, has lived in Israel since 1976 and has four children. He served in the paratroopers and use to live next door to the store. Today Dani lives in the town of Elazar in Gush Etzyon. He owns the building which houses the store and his son lives in the apartment above.

When Dani first opened the store he lived two doors down on the street corner. Since he moved, that building was gutted and rebuilt into a new three floor apartment building with very small apartments. This has become the norm for the old buildings of Nachlaot over the years.

While standing on the street a passerby would not know that there is an optometrist at 18 Abulufya. There is a small sign that says simply “Dani” in Hebrew. The entrance is on the right side at the end of a short path off of the street. The store occupies what were once four different small subterranean apartments which were built before there was indoor plumbing or electricity in the neighborhood. The ceiling is low and barrel shaped. You can see where dry wall was added over the years. In some places you need to duck a bit when going through rooms. 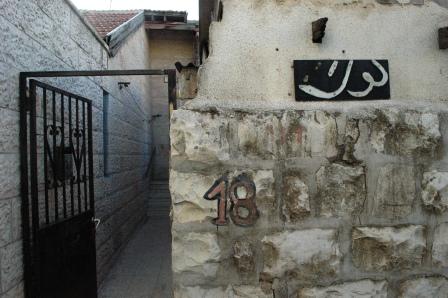 The entrance to Dani’s store

A Yemenite family once lived there. There was also a man named Saadya who lived there with his donkey. (Yes a donkey!)

“I was not the type of person who would go and have a shop in town,” said Dani. “I always felt sorry for people who open their shutters in the morning and who are glued to their shop [all day]. At the same time I don’t come from a background where I could spend hundreds of thousands of Shekels on a shop in town.”

As part of his business, Dani operates a “Gmach”. Gmach is short for Gemilut Hasidim. It is a charitable organization that provides services and items such as clothing to the poor. He has a supply of old and out of style glasses which he provides to people who cannot afford to buy their own. 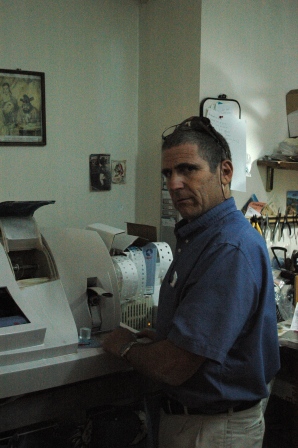 Dani tries to be diplomatic about helping people. “We have a whole room for free. I play it by ear. I don’t want to insult them. My opinion is that every Jew is a Mamlechet Kohanim (the idea that every Jew has a measure of priestly kingship). We are all kings. We all have a certain pride in our center and you should not let a person feel like he is a taker or a beggar.

“We say to people that you can get out of style, things that are new but not in great condition. People come in and I sort of understand where they’re at and I do it in a way where they feel good about themselves. You have to have tact when you give things away for most people. Some people don’t care, but I treat everybody as if they have pride.”

While the frames are free, people still need to pay for the lenses. Dani says that the lenses are not that expensive and that he still makes a determination as to what to charge for them based on the person’s needs. Dani does not have as many people in need of help as before. Both the neighborhood and the country have changed so that people in the area can afford to buy their glasses.

Developers would like to renovate and expand all of the old buildings in Nachlaot, such as Dani’s store. Dani has been given offers to sell but he has no intention of leaving. He did not even want to hear the price that they were offering.

Dani took his family and moved out to Elazar from Nachlaot eighteen years ago. They wanted more space but did not move out of the neighborhood for the same reasons as most young families (e.g. the expensive rents and highcost of buying a home). Dani felt very strongly about living in Gush Etzyon.
“I wanted to live in Elazar. I wanted to live in Judea,” he explained. Dani wanted to fulfill his dream of “settling the land.” “I always wanted to live in a yishuv.” His wife also plays the piano and there was no room for one in their Nachlaot home.

Dani opened a store in Efrat called Mishkafaei Etzion. He did this a few years ago when there were terrorist shootings on the road that connects Gush Etziyon to Jerusalem which left people afraid to take their children up to Jerusalem. There was enough of a market for a store in Gush Etzyon and today Dani splits his time between the two locations.

Dani no longer resides in Nachlaot, but he has strong feelings about how it has changed. He agrees with many that there is not enough parking in the area and that the current situation on Agrippas Street is a disaster. “If Nir Barkat loses the election it should be on that [Agrippas Street] issue,” said Dani.

He appreciates that much of the area has been renovated where it was once run down. But he also does not like all of the absentee landlords. “We have a lot of apartments owned by rich foreigners who don’t really live there.”

Dani also thinks that Shuk Mahane Yehuda has changed for the better. “It was all run down and now you have pizza and pubs. You can go there at night now. In the 70s there was nothing there at night.

Dani’s altruism is not limited to giving away glasses. He still volunteers for army reserve duty; even though, he could have retired from it years ago. One day a month he leaves home at 4 AM and travels north to the Golan Heights. Dani is a captain and spends that day patrolling the border along the Golan. He would not tell me the name of his unit, except to say that it is attached to the Northern Command.
D
aniel Simckes is one of the good people who make up the extended community of Nachlaot. If more people here were like him then Nachlaot would be a much nicer place to live.