MTV’s Search for a Jewish Dad 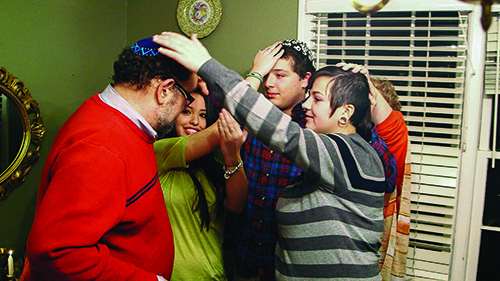 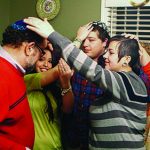 Mr Jacobson blesses the kids as they welcome Shabbat (and Breeana)

Breeana is a teen in Reno, Nevada, the daughter of two women who used a sperm donor to conceive, who embarks on a cross country trip to meet some of her fifteen half-siblings who are also the children of Donor Number 1096, an anonymous six foot tall Jewish man with brown hair and light eyes. The adventure is captured with several cameras by MTV and produced by On The Fence. Is Breeana on this search because her two mothers split up when she was three? Is it interesting that the half siblings without fathers are more interested in finding the biological father than those children with fathers raising them? I don’t know; ask a psychologist. 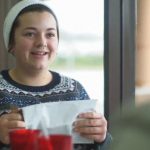 In Episode 1, Breeana, with cameras recording, gets her estranged parents together and tells them of her plan. She then flies to suburban Atlanta to meet two of her half siblings – Jonah and Hilt – and their parents – The Jacobsons. She arrives just in time for Shabbat. Will they bond? Will they feel a connection? Will they care about her journey and her search? The Jacobson’s are huggers; Breeana is introduced to matzo ball soup; and later, over a bagel, Breeana plans to ask Jonah to give her a DNA mouth swab. Jonah and Breeana bond over discussing the types of girls they both like (thick butted). Mr. Jacobson, in his interview of Breeana, lends some adult insight into this project and shares his severe and deep grief over not conceiving his children.

The production makes it seem as if this is new to the Jacobsons, but I am quite sure that the Marietta, GA family were the subjects of a similar project seven years ago on ABC-TV, and perhaps even appeared on Oprah.

The docu-series is produced by Sunset Gower Studio’s “Off The Fence”, Michael Lang (ex-MTV’er), Ellen Windemuth (OTF founder in Amsterdam), Marshall Eisen, Nomi Ernst Leidner, Betsy Forhan and Dave Sirulnick. Wendy Kramer, the founder of the Donor Sibling Registry – which helps internet savvy kids find their half siblings – and the author of “Finding Our Families: A First-of-Its-Kind Book for Donor-Conceived People and Their Families” figuratively lent her DNA to the production.

In Episode 2, Bree visits Jesse Bogdan, 18, a bass player from the Boston suburbs (and I think a member of Shir Tikva). He is from a family of awkward huggers (how about a bro-hug). She also ventures to Ventura County in Southern California to meet Jesse and Jayme Clapoff. Jesse and Jayme, like Jonah and Hilt love sushi and bite their nails (but so do millions of other teens). Jesse and Jayme are the twin children of Janis Clapoff (active in the Jewish communities of Maui and Santa Barbara). Later in the series, Bree probably meets Paige Chaifetz and Maddison Brown. While in Boston she also meets an older and wiser half-brother who tells her that her quest is immoral and the donor should be allowed to remain anonymous.

Will Bree find the anonymous donor (a 6’0″ sporty Jewish Californian Trekkie architect fencer who probably has a mick jagger lower lip)? Will the donor’s rights to remain anonymous win out? Will finding him be a positive influence in Bree’s life and the lives of her half siblings? With so many Jewish half-siblings, will Bree remember the name of the Saabbaath? Will the producers find greater success after this project? Will there be a Real World series of a house made up entirely of half-siblings and their donor? I will watch and let you know.