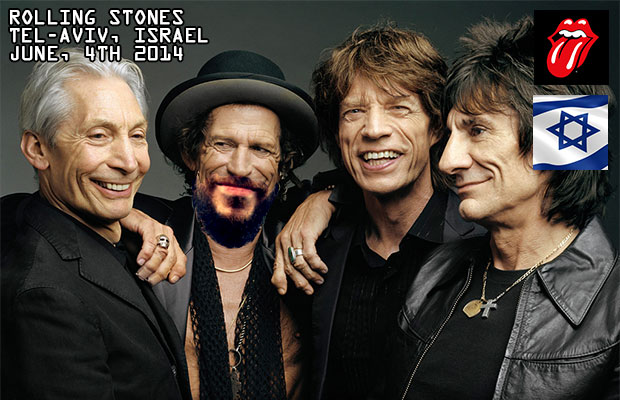 Israeli concert promoter Shuki Weiss recently announced that after over 25 years of effort, he has managed to book the Rolling Stones for a concert in Israel. The show is set to take place on the evening of June 4 in Hayarkon Park in Tel Aviv. Weiss ponied up a rumored record-breaking $3-6 million for the right to bring the Stones to Israel. Word of the Stones impending arrival to Israel had been circulating for months and the BDS brigades have been out in full force trying to lie, bully and cheat their way into getting the Stones to cancel their gig.

The BDSers claim a wealth of international artists who support their call to boycott Israel. But in their eagerness to show broad support, they outright lie. Yes, U2 cancelled a 2010 show in Israel, citing Bono’s back-pain issues. Though the concert wasn’t rescheduled, Bono was in Israel on vacation with his family in 2012. Snoop Dogg cancelled a 2008 show in Israel but didn’t cite support for BDS as his reason. Stevie Wonder cancelled a planned US performance to benefit the Friends of the IDF, but cited his desire to remain neutral as a UN ambassador for peace, not support for BDS. Lenny Kravitz cancelled a 2012 concert in Israel – but he also cancelled remaining European dates because they clashed with a movie project, not because he supports BDS. The Pixies cancelled a 2010 show in Israel in the wake of the Mavi Marmara incident, but are playing a show this summer with Soundgarden. These and other artists are frequently cited as Israel boycott supporters, yet only a handful have expressly come out in support of BDS. In the meantime, the Stones join artists like Elton John, Paul McCartney, Madonna, Metallica, Guns n’ Roses, DJ Tiesto, DJ Shadow, Joan Armatrading, Rihanna, Lady Gaga, Justin Bieber, Alanis Morissette, Paul Simon, Leonard Cohen, Neil Young, Yo La Tengo, Black Eyed Peas, Jane’s Addiction, Faith No More – I could go on and on (here’s a somewhat current list).

Let us then chalk up another victory for the good guys – those people that realize that only a negotiated settlement between Israel and the Palestinians can guarantee peace and prosperity for the region. BDS is just a thinly veiled, dishonest, manifestation of the desire to end the State of Israel. Yup. Great! Woohoo.

Oh. But I’m not going to go to the show. Not because of any boycott or anything, but because it takes place immediately after Shavuot – the holiday that commemorates “Zman Matan Torah” – when God gave the Jewish people the Torah. With the holiday ending at 8:24 pm and the doors opening at 8:30 pm (or 5:00 pm according to the promoter’s Facebook page), there’s no way I’d be able to make it there on time. Even if I took advantage of Weiss’s vague offer (there is no indication of where these Hotels are or how to book them anywhere) of “discounted hotel rates nearby for those who observe the holiday” I still wouldn’t have enough time to get there before the general admission area was mobbed, and lord knows I can’t afford VIP tickets. Also, spending Shavuot in a hotel room in Tel Aviv does not seem like a great way to celebrate getting the Torah. Now I’m sure that this wasn’t done on purpose and that given the Stone’s other commitments, June 4th was the only date that made sense but it’s kind of ironic that BDS didn’t prevent me from seeing the Stones in Israel. Judaism did. Heh.

It doesn’t matter anyway. I’ve seen the Stones perform live several times – in Montreal, Toronto, New York and in Basel, Switzerland. That show was great. the ticket cost about $25 – purchased the day of the show, and the Swiss are so polite! I just walked right up to the front row, sat down and no one said anything. Heh. Suckers! For those of you going, enjoy the show. I’ll be eating my cheesy Shavuot foods and engaging in water fights – our Moroccan Shavuot tradition. Yay!

Oh and I photoshopped that beard on Keith Richards. I was inspired by his Hassidic hat.