The 600: Goodbye, Farewell And Amen

A ceremony was held on a clear spring evening at the Latrun Armored memorial Museum just off the main Jerusalem-Tel Aviv highway on April 22nd, the day after Pesach here and the last day of Pesach for those of you who live abroad. About two hundred people were in attendance including half of the members of my own Lamed Company. This was where, exactly twenty years ago on Pesach, I had my graduation ceremony from training as a tankist in the IDF, but not really because I still had another four months of maneuvers ahead of me. 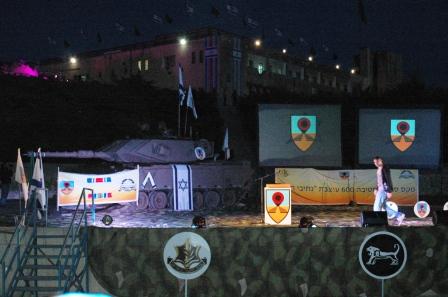 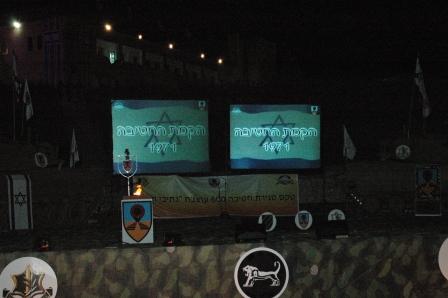 The event was divided into three parts: first the several battalions held independent ceremonies, then the entire regiment sat through some speeches by a few generals and some silly songs sung by a few regular army soldiers and finally each company held its own goodbyes separately.

What began with nothing but smiles and greetings and telling one another how good we looked or how much weight we had lost, turned bittersweet with quite a few tears. I looked around at some of the people with whom I had served with for more than a decade and saw how men who once wore their hair long now cut it short or had gone bald and how some younger than me had already gone gray. 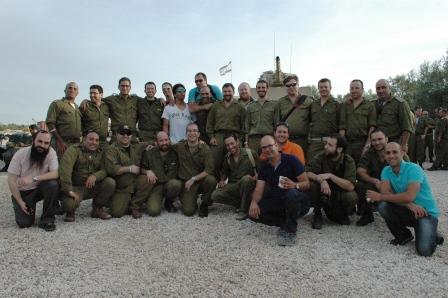 Apparently, the decision to disband the 600th was made about six months ago. This regiment used the older Magach tanks which are actually a refurbished American Patton M60. The Magach had a new 105 mm cannon with a new targeting system added to it in Israel as well as extra armored plating which changed its appearance to the extent of making it almost unrecognizable to anyone who may have served on the Patton.

The Americans themselves decommissioned their Patton tanks more than thirty years ago when the new Abrams tank debuted. At about the same time Israel introduced its own Merkava tank, but it took twenty years to phase the old tanks out of service.

About ten years ago, when my 500th regiment was disbanded, the last Magach tanks, the mark 7 on which I served for twenty years, were taken out of regular army service along with the older 6B. The 401st regiment which had the 6B was upgraded to the newly introduced Merkava 4.

At the same time the Mark 6B was retired even from the reserves and due to budget cuts the reserve regiments which used it were disbanded. The 600th regiment absorbed the soldiers from one of those that were dissolved and my company doubled in size.

For a few years they sent us new soldiers who had served on the Merkava and who first needed to learn how to operate a Magach before starting their reserve duties. About two years ago they told us that they would no longer be doing that and that it was only a matter of time before our unit would also be scrapped.

When I first made aliyah in 1992, people were still serving in the reserves until the age of 55. When I began in the reserves, it was cut to 45 for combat soldiers. By the end of the nineties anyone who just did not want to serve was able to simply not answer his orders and virtually no one was ever arrested for it.

Avoiding the reserves was made easier thanks to changes in policy when first, in 1994, Israelis no longer needed written permission from their reserve units to leave the country and instead only needed a stamp in their passports signifying that their units knew that they had one. Then the requirement for such stamps was also rescinded.

The officers in my unit were never sorry about the people who simply refused their reserve orders. The refrain was always, “we’d rather have fewer people who want to be here and who don’t cause any problems.” Also, many were dropped from my unit because they did cause problems and probably never did reserve duty again.

While the youngest in my company are being transferred to other units with the ones who were Merkava operators going back to serve on that tank, most of us were released from service entirely. They actually let anyone over the age of thirty two go, but some of the officers chose to accept transfers to other units.

I am one of the soldiers to be retired. People are congratulating me for it but I am not entirely happy about it. A few years ago, when I turned forty, they tried to retire me and I asked to stay on. “Tell me that I’m too fat or to bald to serve,” I told people, “but not too old.”

I cannot explain to you what the comradary feels like in the military. Its one of those, “if you haven’t been there or experienced it then you’ll never know,” type of things. I will say that some of the best friends I have ever had are those who I saw at most once a year in reserve duty including officers and tank commanders alike.

I myself, at the ripe old age of 43, actually made it to being the oldest and longest serving member of my company along with just one other guy.

It has been a long strange ride. I remember what it felt like to be a new recruit more than twenty years ago. I kept thinking, “boy was I stupid to do this when I didn’t have to!” I hated every minute of training. The weeks of getting only three hours a day of sleep, the sweat soaked uniforms and too much more to mention here.

The worst were the people who derided the armored as not really being a combat unit. As I look back on it now those always seemed to be people who had only served as jobniks â€“ non combat soldiers â€“ themselves.

I don’t know how they could say that.

OK so we did not have to do as much physically tasking work in the field as the infantry. We also did not have to do the same long distance marches in full gear at a jog like the Israeli infantry units do as part of their training.

But we still put our lives on the line doing guard duty in dangerous places like everyone else.

Just ask Gilad Shalit and the three other members of his crew who were killed in a Hamas attack when he was taken captive in 2006.

Just ask the families of the three Israeli armored reservists murdered in an unprovoked cross border raid by Hezbollah in October of 2000 and whose bodies were held for ransom for ten years before any confirmation of their deaths was given.

Just ask the families of all those armored soldiers who died in wars. For example, most of the tank commanders and almost all of the tank officers who served on the Golan Heights during the Yom Kipur War died in the first days. They died holding the line as the reserves were called up when the infantry broke and retreated.

The 600th regiment suffered heavy casualties as it took part in the crossing of the Suez Canal in the Yom Kipur War.

And for those people who think that its easier to ride inside a tank than to walk, just try and be inside the driver’s pit in the middle of summer with no air conditioning or even a fan. The sweat would get into my eyes after building up under my helmet and I would open a little flap above my head where a night vision device is fitted just to get a little bit of air. Of course I could not do that at night.

In the armored we only got out every other weekend and only from Friday morning to Sunday. Many times I got home really late on Friday and then had to get up by 5 A.M. on Sunday to be sure to catch the bus to where I needed to meet my unit.

Also, some people think that in the armored you spend most of your time doing maintenance on your tanks. I challenge anyone to spend any length of time greasing a tank, doing repairs on it, lifting heavy equipment and other labors on no sleep and after a full week in the field.

As much as I hated the training period in which I felt like a prisoner doing forced labor and hoped for an injury that would get me out of being a combat soldier, I would not trade it for anything

So to all of those people over the years who insulted me personally and every single person who ever served in the armored by saying that we were not really combat soldiers â€“ Fuck You!

And especially to that man who himself never served as a combat soldier who once said to me, “all you do in the armored is clean your tanks,” a special Fuck You!

After twenty years, four months and twenty days as a member of the IDF, since the day that I was first inducted on December 1st 1993, I am once again a only a civilian.

My top ten list of things that I experienced while in military service:

9 â€“ Fitting into 36 inch waist pants for the first time since I was fourteen. (I’m a big guy and that’s actually the thinest I could ever be.)

7 â€“ Feeling the quake of the tank’s cannon when it fired directly above me go through my body.

6 â€“ Getting to throw grenades.

4 â€“ Having to carry around my own utensils all day long throughout training because some asshole in the army thought it a good idea to not to give us any in the dinning hall, except on Shabbat.

3 â€“ Getting to shout greetings back and forth with Jordanian soldiers just across the border when doing guard duty.

2 â€“ Getting access to secure places in the country, such as just above the Taba border crossing with the Sinai, spots along the border with Syria and a few that I can’t mention.