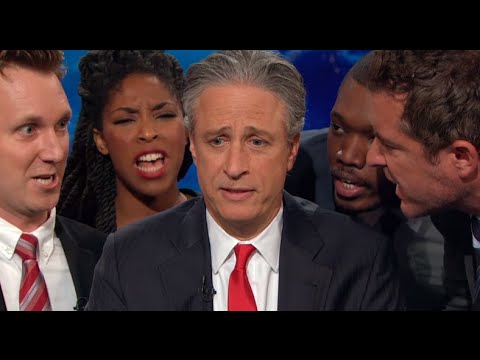 In a week that saw Jon Stewart of Comedy Central’s The Daily Show speak harsh words about Israel’s current operation in Gaza, many expressed opinions about Stewart that were equally harsh. Even Hillary Clinton, who appeared on the show, felt compelled to skool Stewart on the situation. Others were less politic, accusing Stewart of being a self-hating Jew, among other things. The piece above from the show two days ago demonstrates a number of things. It demonstrates that certain pro-Israel elements will not take criticism of Israel lightly – employing all manner of arguments and invective to get their point across. Sometimes said arguments do more harm to their cause, presenting a position that is narrow minded, jingoistic, tribal and extreme. Like say conservative radio host Mark Levin:

Levin said that Israel is doing whatever it can to limit civilian casualties and so he was offended at Stewart joking about how Gazans are being warned about bombings and how they have no place safe to escape to. Levin cried, “Have you fucking seen Israel, you little twerp? Have you fucking seen what surrounds Israel, you little twerp?” … Levin did make two asides in his rant to take a bit of a cheap shot at Stewart over the fact that his original last name was Liebowitz. Levin cried, “I don’t trust Jews who change their names!” and asked, “Why did he change his name? I’ve asked this for many years. Why?”

Levin could have used the opportunity to note that Gazans don’t have bomb shelters because their government would rather use cement to build terror tunnels into Israel. Or whatever. Instead Levin goes on a rant and calls Stewart a “little twerp” and criticizes him for changing his name from Leibowitz. I mean I get it. Conservatives, Republicans and Tea-Partiers have borne a lion’s share of the brunt of Stewart’s quips over the years. And it’s understandable. Republicans are funny, what can you do? I’m sorry about the butt-hurt and I’m sorry that Jews for the most part take umbrage with domestic Republican policy that verges on xenophobic and whose rallying cry is a heartless manifestation of Social Darwinism. But that’s the way it is! And in fairness, the Daily Show clip featured here shows that both sides gang up on Stewart whenever he mentions Israel. The talk backers on both sides are bat shit.

If you really want to help your cause, try not to be a mere mirror image of some Hamas loving, foaming-at-the-mouth Jihadi. Employ intelligence, nuance and calm while avoiding anger, shouting, expletives and self-righteous indignation. Also, in case you missed the memo, President Obama is not a crypto Muslim hell bent on destroying Israel and the Jews. Have a nice day.