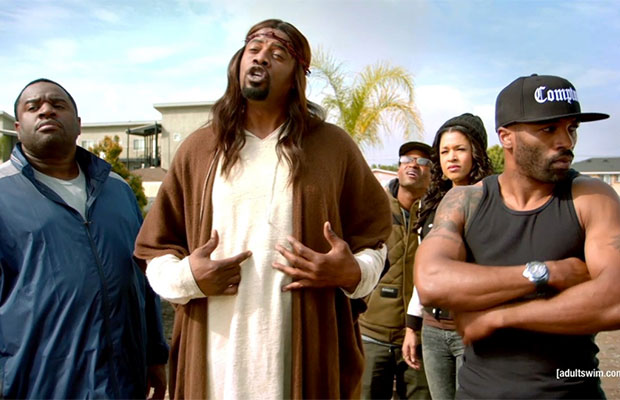 Last week saw the premiere of Adult Swim’s new comedy series Black Jesus. Created by Aaron McGruder (Boondocks) Jesus here is portrayed as living in present-day Compton, California, “on a daily mission to spread love and kindness throughout the neighborhood with the help of his small but loyal group of downtrodden followers.” Now, despite visiting Los Angeles frequently, I’ve never been actually been to Compton nor have I ever met anyone from there. My only exposure to Compton has been thanks to NWA’s pioneering gangsta rap hit Straight Outta Compton – and that was released 26 years ago on August 8, 1988 (!!). While Black Jesus, played by newcomer Gerald “Slink” Johnson (Grand Theft Auto V) isn’t a gangster, his portrayal is in line with what one would imagine conforms with that of a downtrodden resident of Compton – “…a profanity-using marijuana smoker who hangs with gang-bangers and trades the wine of sanctification for cheap beer in a paper bag.” Needless to say. some Christians are not pleased.

There’s a Change.org petition, signed by 10,000 people, calling for the cancellation of the show:

This is blasphemy and an insult to all believers of Jesus Christ. This TV show has twisted the words of our Lord to make a mockery of him and simply can’t be tolerated. This show is also racist and degrading to the black community. If you believe in the power of God, Please take 2 minutes to sign this petition and remove this blasphemy off our tv shows.

Kerry Burkey, senior pastor at the 300-member Rockledge Church of Christ, told USA Today that “Today, faith is perceived as a myth. There is a lack of respect for the authority of God, although I will tell you that if Hollywood had produced a program called ‘Black Muhammad,’ or whatever, there would be an outrage.”

No one associated with the show has responded to any of the criticism, however, prior to the premiere, the show’s producer Robert Eric Wise told Vice: “Judea was so much of a hood that Rome sent Pontius Pilate, the biggest thug governor in the empire, to manage it … The real biblical and historical Jesus was born and raised in the hood.â€

Probably the most thoughtful commentary came from minister Christopher House who wrote in an article on The Huffington Post that the show provided an opportunity for Christian reflection. “Identification precedes personal, spiritual and social salvation … Rather than simply dismissing the show as being blasphemous, maybe we should continue to watch with an awareness of contemporary issues and a strong sense of irony. To do so would ask us to consider what then does it mean to have a black Jesus living and moving in impoverished black spaces?”

Yes, yes, yes. That’s all fine and good. Be thoughtful, consider the spiritual, theological and racial implications of Black Jesus. Yes, that’s just great. But what about the Jews? In the first episode of Black Jesus entitled “Smokin’, Drinkin’, and Chillin'” there is absolutely no indication of Jesus’ Jewish heritage. I mean if Jesus were to come back, and if he’d live in Los Angeles, he wouldn’t be white for sure – traditional depictions of Jesus as a golden tressed Caucasian do not correspond with what typical Jewish residents of Judea would have looked like 2000 years ago. He would more likely look like a cast member of the Shah’s of Sunset. Not the regular, super rich and tacky Persian-Jewish cast members who live in Beverley Hills of course. Probably a distant brownish cousin, down on his luck, crashing in someone’s Pico Robertson guest house. But no. Instead we get Gangsta Jesus without even a drop of Manischewitz anywhere! And he eats pork ribs! Oy!!

I mean seriously, haven’t our people suffered enough?? Here’s the trailer. Do with it what you will.