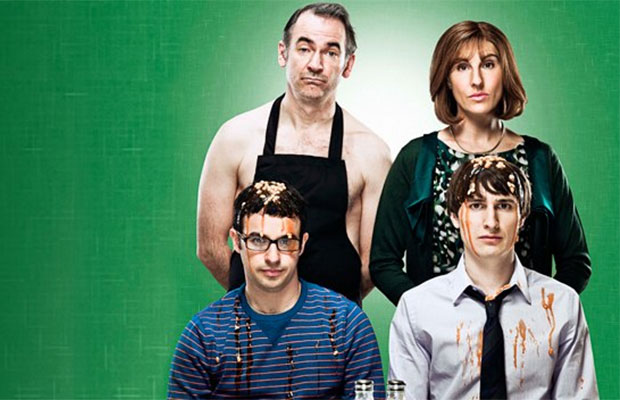 Popper’s original semi-autobiographical series, … centers on the Goodmans, a traditional but not strictly observant Jewish family, and chronicles their Shabbat dinners. Every Friday night, brothers Adam and Jonny reluctantly visit their parents — mom Jackie, who is obsessed with MasterChef, and dad Martin, who loves to walk around shirtless — for a home-cooked meal. Adding to the gallery of oddball characters is a grandmother who struts her stuff in a bikini and eccentric neighbor Jim who constantly interrupts dinner.

Except that the Goodmans aren’t exactly very traditional. Sure they get together on Friday nights but it’s hardly a Sabbath meal as there is no prayer, no kiddush wine and nary a Challah to be found. And sometimes dinner is at a local Chinese restaurant. Sure they throw out the occasional “Mazal Tov!” and their synagogue services are officiated by Rabbis that look Hassidic – what a real Rabbi looks like in the eyes of your average British person. I mean, present them with a rainbow tallis, guitar strumming lesbian Rabbi and most English folk will be all “Wha….?” or whatever the British version of that is, I don’t know, maybe “Bollocks! Is that bird supposed to be a Rabbi, eh guvnuh?” I guess that’s best for ratings – makes the family have more universal appeal while still remaining semi-autobiographical.

And now, CBS is planning on perhaps putting together a pilot seeing as they have done so well with family oriented comedies like Modern Family. But of course the show will have to be adapted for US audiences, which might mean that the Goodmans will lose their Jewish identity when they cross the Atlantic. Where have I seen that happen before? Hmmm…

In any case, I wish CBS well! I think the world needs more Jewish themed or inspired comedy shows. ABC has renewed The Goldbergs for a second season, so somebody is watching! Although Friday Night Dinner is a British style comedy and those sorts of things don’t often translate well when adapted for an American audience. Last year NBC did a pilot of Friday Night Dinner and never advanced with the project. Bad mojo sometimes when it comes to adaptations. For instance, the original UK version of Coupling was nothing short of brilliant, but the US adaptation was universally panned as a lame imitation of the UK original. The American cast just weren’t capable of more than a stilted delivery of a script that in the hands of the UK cast, was uproariously funny. The US adaptation was cancelled after 4 episodes. Naturally. Hopefully CBS won’t butcher Friday Night Dinner. Because, you know, haven’t our people suffered enough?

Anyway, here’s an episode I found on YouTube. Watch it quickly before Channel 4 yanks it.