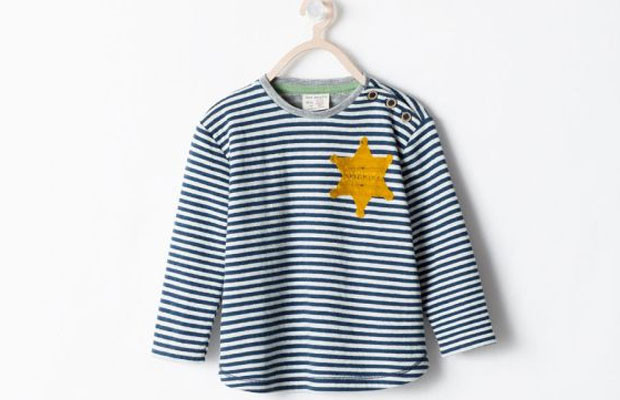 Spanish fashion retailer Zara earned the ire and incredulity of people worldwide after tweets aimed at the company lambasted it for producing a child’s sheriff star shirt that resembled the uniform worn by Jews in concentration camps during the Holocaust. The company of course apologized and the shirt (pictured above) was immediately pulled from its online catalog and stores.

Good job social media! But Nathalie Rotschild’s question remains relevant and unanswered. What indeed were the designers thinking? I am willing to give Zara the benefit of the doubt and assume that no offense was intended. It’s clear that certain parts of the world are more sensitive to Holocaust issues than others. This is especially true in places that don’t have a lot of Jews or were not directly affected or occupied by the Nazis. How else to explain things like a restaurant in Taiwan recently naming two of its sausage filled dishes “Long Live the Nazis?” Tsao Ya-sin, the 24-year-old manager of the restaurant apologized saying she had no idea the word Nazi would be so controversial. The dish had been selling for a year before anyone noticed. There was also the KFC / Hitler themed restaurant in Thailand, or the Soldatenkaffee restaurant in Indonesia, featuring Nazi memorabilia and waiters in SS uniforms serving beer and schnitzel.

Given Zara’s proclivity for using sweatshops in desperately poor countries to manufacture their cheap clothing, it’s possible that a shirt went through the entire design and manufacturing process without anyone saying “Hold on a minute. There’s something that’s not quite right with that design…” Obviously, the workers who often sleep where they work, have more pressing things on their minds – like keeping their desperately needed jobs and meeting punishing quotas. They don’t have the time, education (some of them are children) or inclination to worry about offending some Jews.

But you know what? I don’t give a shit about the stupid shirt. What offends me far more is that people shop at Zara at all. The clothing is shit, the fashion is derivative and the apparel is soaked with the tears of overworked and abused employees.