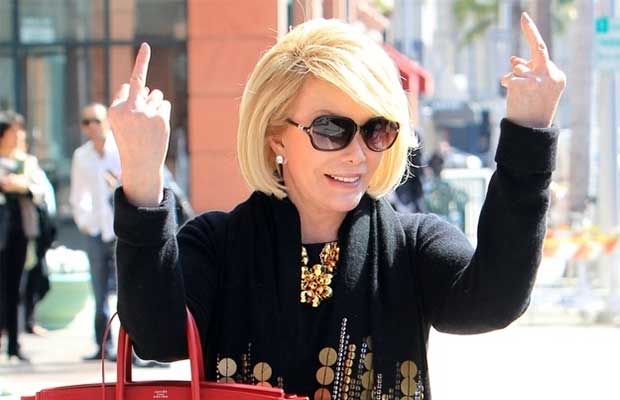 Joan Alexandra Rosenberg (née Molinsky; June 8, 1933 – September 4, 2014), known by her stage name Joan Rivers, was an American actress, comedian, writer, producer, and television host, best known for her stand-up comedy, for co-hosting the E! celebrity fashion show Fashion Police, and for starring in the reality series Joan & Melissa: Joan Knows Best? alongside her daughter Melissa Rivers. In her book I Hate Everyone… Starting With Me, Rivers explained to her daughter her vision for her funeral:

When I die (and yes, Melissa, that day will come; and yes, Melissa, everything’s in your name), I want my funeral to be a huge showbiz affair with lights, cameras, action…. I want Craft Services, I want paparazzi and I want publicists making a scene! I want it to be Hollywood all the way. I don’t want some rabbi rambling on; I want Meryl Streep crying, in five different accents. I don’t want a eulogy; I want Bobby Vinton to pick up my head and sing Mr. Lonely. I want to look gorgeous, better dead than I do alive. I want to be buried in a Valentino gown and I want Harry Winston to make me a toe tag. And I want a wind machine so that even in the casket my hair is blowing just like Beyoncé’s.

My hour with the legendary JOAN RIVERS: I was in Utah at the Yarrow Hotel during Sundance and had earlier watched the premier of the documentary “Joan Rivers: A Piece of Work” at Temple Har Shalom’s “auditorium.” I left the room of Jack Song and his Prop 8 filmmakers after interviewing them for the LA Jewish Journal. Who was in the hallway? Joan Rivers. I went back in the room to let the guys know and they came out to chat with her. Roger Ebert and his wife also were in the hall and Rivers chatted them up with grace and love. Later that day, I had the opportunity to interview Rivers for over an hour at a Main Street restaurant. I still have the little mini tape of our interview and showed it to Shirley Stein Shchory over Labor Day. Anyway… I started the interview by telling Joan Rivers about how I saw her in the hotel hallway with Ebert and how I was struck by her genuine kindness towards him. She said, yes, he was great and how she, herself, could never go on living like he did, unable to speak after cancer surgery. She would never want to live that way. We chatted about Penn, where her daughter had studied. I suggested that she hire student interns to enter her jokes into a database and she could publish Milton Berle-like joke books. I asked her if it was true that her mother was deaf – during the film she had told off a heckler by saying that she knew pain, since her mother was deaf. She told me, no, her mother was not deaf. And explained how you have to do whatever is necessary to control the audience when a heckler speaks up. She also shared a tip she learned from a French actress over 4 decades ago about how to have incremental plastic surgery every year or so. I won’t bore you with the details. May her fans and family be comforted

Probably my favorite Joan Rivers moment – other than that time she went off on Hamas, is this video, posted on Heeb. featuring the Beastie Boys when they were 19. Hard to imagine that Joan would outlive the then strutting and hormonal Adam Yauch, aka MCA by two years.

Of course it wouldn’t be a Jewlicious Post without Joan Rivers going off about how much she loves Israel:

Unabashedly opinionated, never pandering to anyone, never apologetic, they don’t make Jewish comics like that anymore. We’ll miss ya Joan.