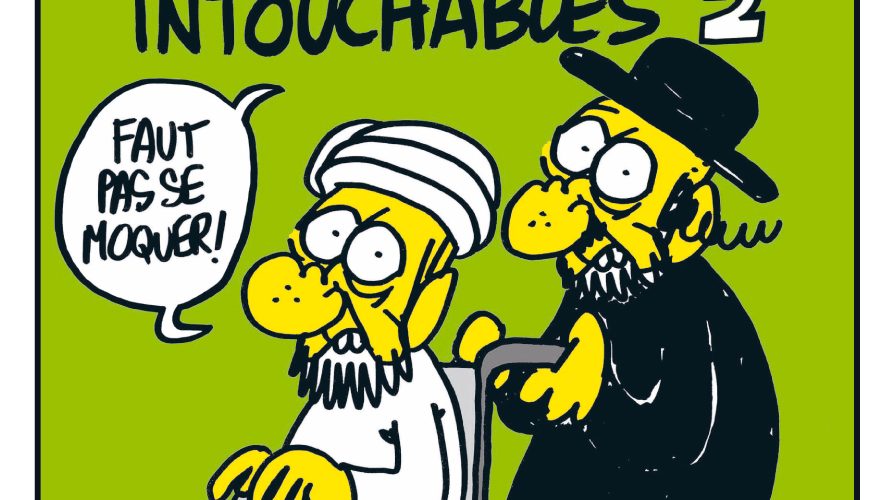 This morning, Americans awoke to the news of a brutal, murderous terror attack in Paris against the offices and employees of the satirical publication “Charlie Hebdo.” Its offices had been attacked before, but this sickening massacre killed over 12 and injured more. The Muslim attackers reportedly shouted in Arabic, and it is assumed that their attack was related to the magazine’s recent cartoon depiction of the Islamic prophet Mohammed and its report of what Paris would look like if France becomes an Islamic state. This was based on the novel by French right-wing, Islamophobic author Michel Houellebecq whose new novel has France led by a Muslim president in 2022.

Among those murdered were the magazine’s editor and cartoonist, Stéphane Charbonnier, known as Charb; Bernard Maris, an Economist and writer on the board of Charlie Hebdo; and three more cartoonists: Jean Cabu, Georges Wolinski (a member of the tribe) and Bernard Verlhac, known as Tignous. After the rampage, the terrorists fled the building and drove to the 19th arrondissement, near the Porte de Pantin metro station, where they abandoned their car and hijacked another auto. The sense that the 19th is an area with a greater concentration of Muslim immigrants will most likely only fuel French hatred of immigrants and hurt the chances of refugees from Syria gaining access to France.

In the past week, the Jewish Agency reported that 50,000 French Jews requested information about immigrating to Israel in 2014. There are about 600,000 Jews in France. Natan Sharansky, the Agency’s Chairman told The Jerusalem Post that the Jewish Agency is holding 2 information seminars an evening in France, whereas a year ago it held only one a month. According to Sharansky, “the overwhelming majority” of Jewish émigrés from France, possibly up to 70 percent, choose to go to Israel, instead of Montreal, the EU countries, or elsewhere. France, followed by Ukraine, led the list in terms of numbers of immigrants to Israel in 2014, according to the Jewish Agency. Last April, the Agency said that it planned to double the number of French speakers employed in its Israeli call center (of course, doubling the number from two is just four… wink wink).

Note: Houellebecq’s sixth novel is titled “SUBMISSON” It is a best seller in France at the moment. It is set in 2022, when Mohammed Ben Abbes wins the French presidency over Madam Le Pen. President Ben Abbas Islamises the EU, with Turkey and various north African countries joining the bloc. The protagonist, François, a 44-year-old literature professor, converts to Islam after a university director introduces him to the pleasures of polygamy with submissive wives.

Note: The photo above is of a controversial 2012 Charlie Hebdo cover. The French government had appealed to the editors not publish that issue.