Sunny Olivia: SS Does not stand for “Strip Show” 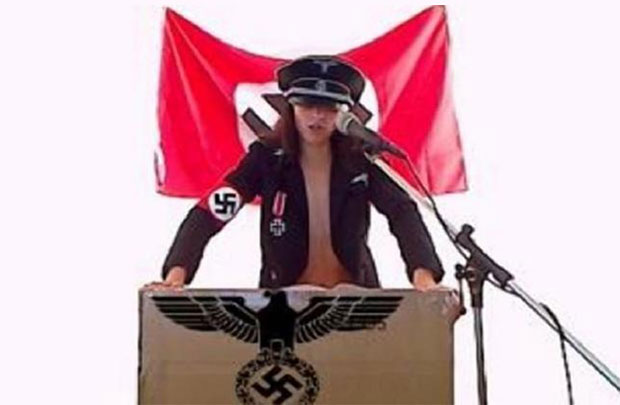 Cam girl Sunny Olivia earned her a moment of Internet fame as well as a reported $30,000 in tips last Sunday when she did a live strip show on her MyFreeCams channel featuring her in an SS jacket and hat. The New York Daily News described the show, which was eventually shut down by MyFreeCams admins, as “Wearing a Nazi jacket with no shirt underneath, she stood in front of a podium, tipped her military cap and wrapped herself in the red, white and black flag during the bizarre burlesque.” Vocativ described the ensuing fallout:

Both social media users and her fellow cam models blasted her costume choice and the ensuing anti-Semitic conversation in her chat room. Some of the other models on MyFreeCams took to Twitter and attacked her with words like “scumbag” and “insane,” while calling on administrators to ban her from the site. #SuspendOlivia emerged as a hashtag used to call for the suspension of her MyFreeCams account. At least one performer used the opportunity to donate half her earnings to the Museum of Tolerance, which examines racism and prejudice around the world… Olivia herself tweeted about the performance, defending it as an example of freedom of speech.

I reached out to Sunny Olivia and asked her what the motivation was behind the show – an exercise in free speech or a customer request? I haven’t received an answer yet but I will update this post if I do. The Waffen-SS was the armed wing of the Nazi party and during WWII was involved in innumerable war crimes. As for free speech, Oscar Wilde once famously opined “I may not agree with you, but I will defend to the death your right to make an ass of yourself.”