Israelis at the Shuk React to Jonathan Pollard’s Release 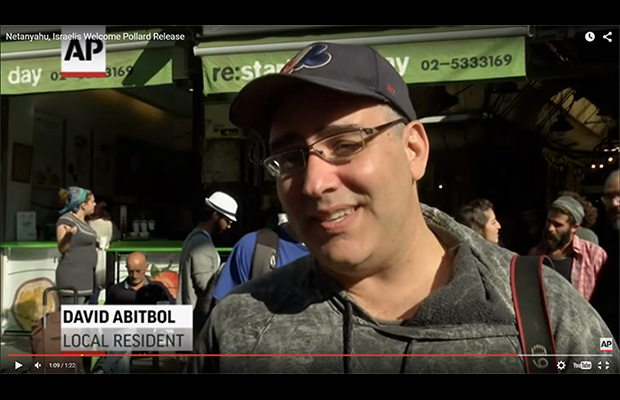 AP reports “Israeli Prime Minister Benjamin Netanyahu welcomed the release of convicted spy Jonathan Pollard from prison Friday, saying he wished him well in this new chapter of his life. Many shoppers at Jerusalem’s Mahane Yehuda market agreed. (Nov. 20).” For those of you who don’t know, Pollard was convicted and sent to prison for life on espionage charges. After 30 years in jail, 7 of which were spent in solitary, Pollard was finally released on parole. As part of his release, all sorts of restrictive conditions were imposed on Pollard including restrictions on his ability to travel outside the US for the next five years. As such it may be a while still before Pollard can enjoy a nice steaming bowl of kubeh at the Market.

And that guy at the end? Both insightful and handsome, am I right? That’s our fearless leader ck!