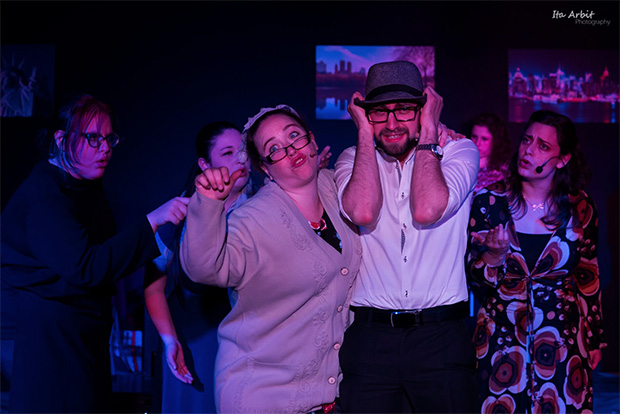 English-Language Theater Opportunity in Jerusalem – Get Ready to Kick Back, Cringe and LAUGH!

You know it. I know it. It’s that universal moment of awkwardness that just about everyone can relate to… a first date.

Ready to double the awkward level? Make it a blind date… a blind date that your nearest and dearest friends, family and former lovers all crash to guide you through the evening with some of the best and worst relationship advice you’ve ever heard to make said date a success.

“First Date”, a musical romantic comedy that follows the above story line, opened at AACI earlier this month and there are just four shows left! Expertly directed by AACI gem Layla Schwartz with musical direction and production by theater veterans Haim Tukachinsky and Raphael Poch, First Date presents a delightfully cringeworthy performance of the ins and outs of an early romantic encounter between the charmingly nerdy yet sensitive Aaron (played by Shay Amoyal) and the sassy yet commitment phobic Casey (played by Miri Fraenkel).

Highlights of the ninety-minute show include the humorous “Bail Out Call” number led by best friend Reggie (Elinor Kaufman), the realization that your evening companion may well have Googled you before showing up for a first date (featuring “Google Girl” Rachel Greene) and the highly naughty yet tempting seduction by Casey’s former lovers and “bad boys” mid-date (played by Hanan Schoffman and Ziv Stern)!

On a deeper note, many audience members could identify with the reality check of how we idyllically remember our exes compared to how they actually treated us (starring Shavit Levine as Allison), wry observations of the know-it-all waitress who has seen way too many first dates at her bar (epically executed by Shlomit Leah Kovalski) and of course the guidance and commentary of the wise older sibling who just wants to see her baby sister settle down (expertly played by Aliza Schoffman Land).

“First Date” serves up a lot of laughs while simultaneously giving gravitas to the hopes, fears, baggage and bravery that tend to accompany folks at the start of any relationship. The homage to these sensitive and thoughtful moments and unrelenting willingness to capture every awkward element is what makes this performance such a gem.

The remaining performances of First Date will be on February 27th, March 2nd, 3rd and 5th. Reserve your tickets at 02-566-1181 or IsraelTheaterSource@gmail.com. More detailed ticketing and venue information is available on the production’s First Date Facebook Page.