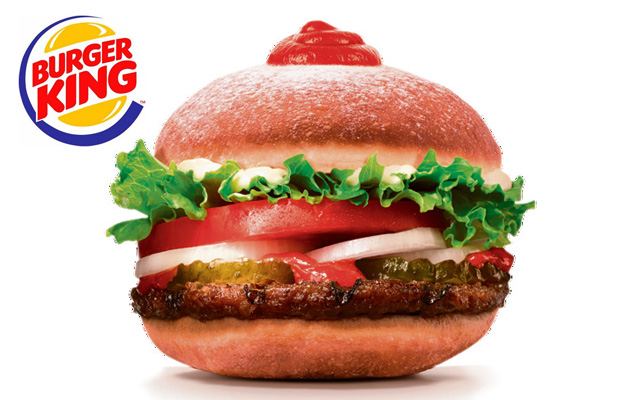 As Hanukkah rapidly approaches, the nation both consumes donuts and is consumed by donut madness. How else does one explain the SufganiKing donut burger from the Israeli Burger King? Ynet reports that

The “SufganiKing” will be a normal Whopper hamburger, but with donuts to be put in place of buns. Ketchup will replace the normal jelly donut filling which is typical of donuts sold throughout Israel during the Festival of Lights. Israeli Burger King employees have already tasted the new SufganiKing, and say it tastes delicious. The SufganiKing will be available at Burger King outlets throughout Israel from the start of Hanukkah, which this year begins on December 25th, and will be available until the end of Hanukkah on January 1st.

It sounds weird and since I don’t know any Israeli Burger King employees, I’ll have to wait and see how this thing actually goes down with the Israeli public. I mean White Castle flirted with a latke burger, so why not?

And then there’s the Grinch that stole Hanukkah. I’m talking about Israeli Health Minister Yaakov Litzman, who is an ultra Orthodox Hassidic Jew. Recently he called on Israelis to stop eating Sufganiyot – the Jelly filled donuts that are sold and consumed in Israel during the Hanukkah season. According to Ynet, Litzman stated that:

“I call on the public to avoid eating sufganiyot, which are rich in fats,” Litzman said at the conference in Herzliya to promot healthy eating. “You can find alternatives for everything nowadays and there is no need for us to fatten our children with sufaganiyot, which are not in line with the principles of health and proper nutrition.”

He had earlier stated that McDonalds restaurants in Israel are a public health menace and should be banned. He has yet to weigh on the SufganiKing. He is planning on instituting wide ranging food labeling laws aimed at encouraging better dietary habits in Israel. I hope that included food label warnings on unhealthy Haredi faves like Deli Loaf, Gefilte Fish, Cholent and super sweet Kosher wine (all gross!).

Ironically, Israel’s tradition of eating sufganiyot started as a make-work program by the Histadrut at a time when most Israelis consumed easily prepared homemade latkes. Sufganiyot are not easily made and it was hoped that this would create more work for bakers. Now that Diabetes rates in Israel are at epidemic levels, well… maybe Health Minister Litzman is the best thing to come out of both the Likud led government and Haredi Judaism!