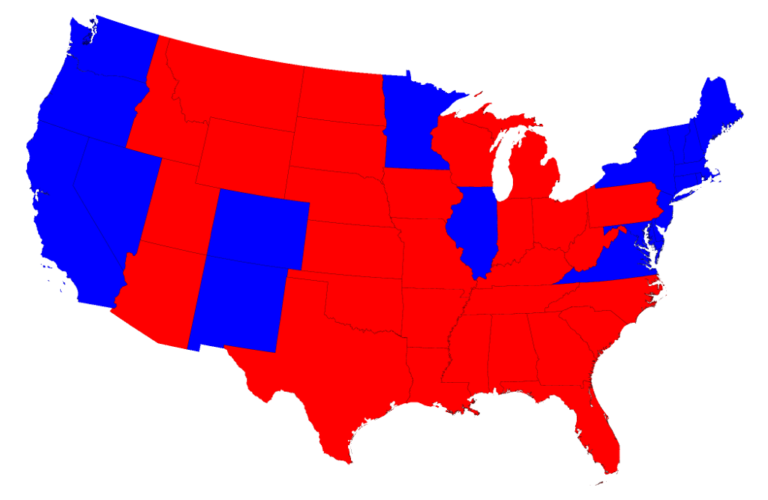 Yesterday America’s Secretary of State John Kerry gave a passionate speech on the state of the world’s longest running and most volatile conflict. In what people have described as his valedictory address, Kerry called for an end to settlements and the need for all parties to accept the two state solution.

He even came out in favor of the division of the capital city.

John Kerry is right? The two state solution is necessary. America cannot be a democracy and the American State at the same time. It must choose one or the other.

So the real America, the one in the more rural parts of the country which overwhelmingly voted for Trump, must separate from the urban centers which voted for Clinton.

Trumpers must acknowledge the right of Clintonites to self-determination. The time has come for this. In fact it came long ago. Never mind that they have allowed themselves to be governed by a Democrat for the last eight years. Forget the fact that all Blues who are American citizens have the right to vote. This was all just a subterfuge and was never really meant to be honest moves for peace by the Reddies.

Even their recent withdrawals from Nevada and Virginia were just attempts at misdirection, leaving these areas behind as nothing more than big jails.

The Blues still must suffer under an occupation. Whole cities like Chicago and Los Angeles have been surrounded by Red settlements like Orange County and Indiana. How will they ever be able to have a state of their own when these settlements prevent them from having contiguity?

And just look at America’s map these days. Thousands of square miles of Red territories in the middle separate the Blue on the coasts. Idaho, Montana, The Dakotas, Nebraska, Kansas – all red.

The 2016 elections proved that the long held policies of the Reddies have actually been to transform as much of America Red as possible. Even as their leaders speak of acknowledging the right of the Blues to have their own state, they have continued in their colonial policies, turning once Blue States like Pennsylvania and Michigan Red.

How much longer can the Blue States be forced to suffer domination at the hands of the Red States. And as more and more Reddies settle in Blue areas they are creating facts on the ground, turning blue to purple. This will make an eventual two state solution impossible.

They must end the settlement activity. Fox News should relocate its headquarters from New York to Des Moines. The entire Trump family should leave the city and Trump Tower should be renamed for Bernie Sanders.

And most importantly, the Reddies must acknowledge that Washington D.C. does not belong to them alone. It is the historic capital for the Blues too. It is therefore really two capitals for two peoples.

The Reddies must stop with their efforts to create facts on the ground in Washington to prevent Blues from also having the city. The opening of the new Trump hotel there was just the latest in a long line of steps made to keep Blues from their claims to the city.

The recent renovations of the Washington Monument and the additions of new monuments in the city were inexcusable violations of the status quo.

John Kerry was absolutely right. The Red apologists who condemned his speech are nothing more than a bunch of racists who do not really believe in Democracy. We must act now to separate these two peoples from one another for the sake of world peace. The window for action is closing.

When Donald Trump becomes President he will have to take swift action to settle this conflict once and for all. He can either show that he is a brave leader like Yitzhak Rabin and Charles de Gaulle who also faced such challenges. Or he can let the situation deteriorate until it leads to World War III.