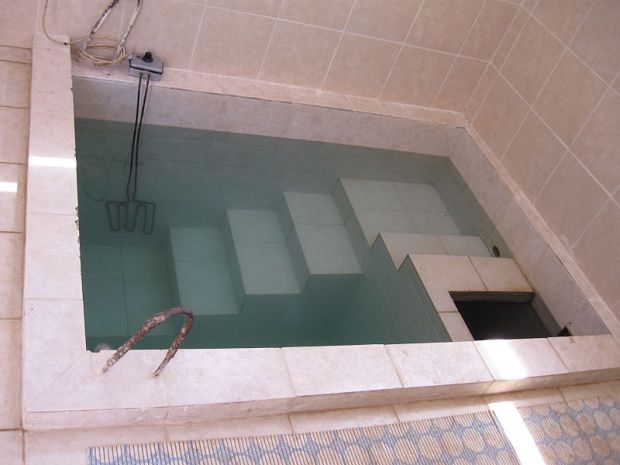 A Mikveh attendant who gave her name as Riva Rivenu told reporters that confusion over who had made an appointment for a 7:45 immersion led to the fracas.

Brooklyn, February 22 – Officers from the NYPD’s 66th precinct responded to a call last night at a Jewish ritual bath, where witnesses say two women came to blows over whose turn it was to immerse. The facility’s volunteer director called the incident the worst case of Nidda K’negged Nidda she had ever seen.

Four policewomen arrived at the Mikveh at approximately 8:20 Tuesday night after a bystander called 911 to report that an argument between two women over their places in line had descended from name-calling into shoving, and then into punches, kicks, scratches, and the hurling of any object at hand. A Mikveh attendant who gave her name as Riva Rivenu told reporters that confusion over who had made an appointment for a 7:45 immersion led to the fracas.

“It happens a lot, but this time neither of the women would budge,” she recalled. “It escalated into name calling, with one shouting that the other was nothing but a windbag, and the other retorting that the first woman was a “massiver ruach,” using a Hebrew word for wind.

“Usually women are OK waiting a few more minutes,” she explained. “Even if someone gets impatient, there’s enough maturity in the room for a funny remark to dispel the tension and animosity. The humor can even get puerile, which is uncharacteristic for this crowd, but the situation lends itself to that kind of thing. I mean, every single woman who comes to us, well, we know what she’s doing later that night, which is a mite awkward. We get girly and child-like in the waiting room. Kid-ish. We do kid-ish.”

Rivenu observed that most of the tumult the Mikveh experiences involves large groups of women who escort a bride to her first immersion the night before her wedding. “It’s a madhouse then,” she noted. “We get these women dancing in circles with the bride at the center, whooping, sometimes even ululating. A particularly rowdy bunch was here two nights ago, and they wouldn’t shut up. In sixteen years as a Mikveh lady, I’ve never seen such a severe case of Ring around the Kallah.”

Another eyewitness, who declined to be identified for reasons of modesty, expressed bewilderment at the turn of events. “My biggest tension around these things isn’t with other women, but with my husband,” she confessed. “He’s supposed to be with me after I come home from the Mikveh. But he’d scheduled a little celebration at the Beis Midrash in honor of completing another section of the Talmud. When I realized over the weekend I’d be going to the Mikveh last night, I put my foot down. I pointed to the nights before and after, and I said, ‘Now you siyum.’ Then I pointed to last night: ‘Now you don’t.'”