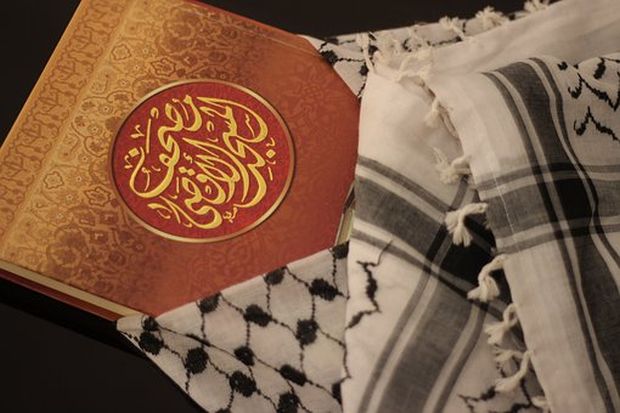 The movement, which has yet to decide on a name, because if they did it might get rendered in writing or print in this article or elsewhere, numbers somewhere between twenty and fifty people.

Cairo, July 25 – Concern that mere refusal to depict the founder and prophet of Islam provides insufficient safeguards against blasphemous thoughts has led a group of extra-devout followers of his teachings to refrain from contact with any of his written or printed words.

Al-Fakhnyakt, a member of the venerable Muslim Brotherhood, counseled his followers not to look at the Quran or related texts, lest such a visual encounter lead one to visualize Muhammad, which would violate an important tenet of the faith.

As such, explained Imam Anl Fabbet, these extra-religious Muslims have taken to staying home during the five-times-daily prayers, lest their presence in a mosque bring them into contact with such texts. “Some of us even avoid listening to the muezzin recite the liturgy,” he noted. “The importance of this reverential approach cannot be overstated.”

Anl Fabbet’s disciples concede that such an austere approach might prove impractical for most. “Far be it from us to declare that what everyone else is doing is heretical,” admitted one adherent, who requested his name not be mentioned, but did not clarify whether that was for purposes of anonymity or an extension of his religious practice. “By the same token, I have acquaintances who do not merely cover their women from head to toe, but go as far as covering from head to toe anyone whose mother was a woman. We each have our stringencies.”

The movement, which has yet to decide on a name, because if they did it might get rendered in writing or print in this article or elsewhere, numbers somewhere between twenty and fifty people, based on an informal count by Imam Fabbet. “We of course welcome all newcomers.”

Some of the more radical members of the sect, however, have harsher words for those who fail to live up to its standards. “Now that this group exists, no one can honestly deny he is aware of the alternative to the risky act of looking at the prophet’s words, which is only one step away from looking at his very visage,” insisted Sankti Monyous. “If Allah wills it, the time will come when our manifestly correct teachings will sweep across the world in the manner that the prophet’s did, and they will realize the truth and renounce their infidel ways. By the sword, if it comes to that, which I am told – by word of mouth, of course – is the way the prophet’s followers did it.”