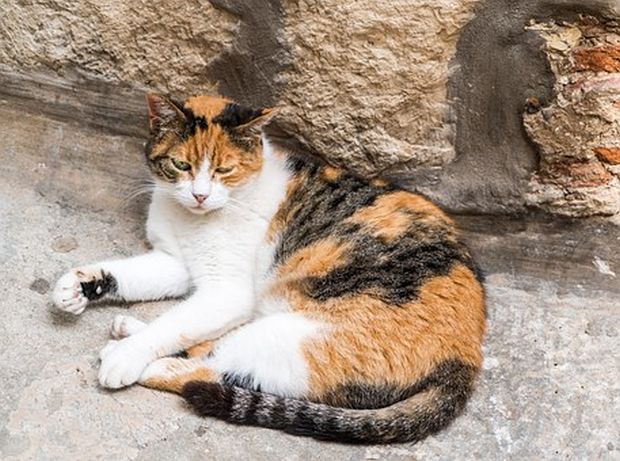 The situation is made all the more puzzling to the cat in light of her impending third litter of kittens.

Jerusalem, October 28 – A street-dwelling feline that found shelter and food scraps in a neighborhood home is experiencing difficulty in figuring out what makes the humans who sometimes appear there kick her out when she could be so happy indoors.

The five-year-old calico, a three-time mother, made the find two months ago in the city’s Nachlaot neighborhood. Multiple human inhabitants of buildings on her street often distribute fish or chicken remainders to local cats, including house number 12, and on many occasions, the residents of number 12 have left a door, window, or other aperture at least slightly open enough for a cat to pass through – an act that could only be perceived as an open invitation, consistent with the care manifest in providing chicken scraps. However, the humans in number 12 have been acting in an illogical manner, chasing the cat back onto the street each time she has availed herself of the openings to make herself comfortable inside.

The situation is made all the more puzzling to the cat in light of her impending third litter of kittens, which she still hopes to birth in the cozy confines of one of number 12’s bedrooms. Given the concern the human residents of the house have shown through their distribution of leftovers to the area’s felines, the expectant mother now associates the location with fulfilled needs, few of which, if any, carry more importance than a safe, sheltered space for birthing and initial care of kittens. However, the humans appear not to accept her presence past the doorway of the residence, throwing into disarray her plans for the delivery and post-partum periods.

Some features of the residence interior have puzzled the cat before, but none have proved as troubling as the humans’ mysterious objection to her presence. On two occasions, the cat has sought to find a spot to relieve herself while inside, but was unable to find a place in the house with soft enough earth to cover her output. In both cases, she had to make do with urinating and defecating on a bed and moving the covers over the soiled spot, a less-than-satisfactory solution for a species so fastidious about hygiene.

If the cat cannot gain access to the house in time for her upcoming birth, she plans to look for the car those humans sometimes use, and enter it through the window they keep leaving open.