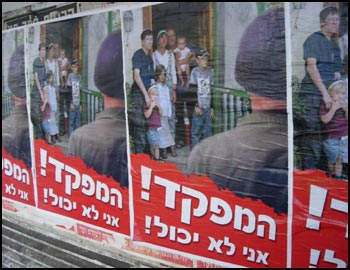 What are we going to do? Some of those poor settlers are suffering from non-stop attacks on their character, their true intentions with respect to the pullout plan, their attacks on the current PM of Israel and his cabinet. Apparently it is only government plants from the shabak doing this. The settlers have done nothing wrong. They don’t deserve any of this.

Nope, when some stopped all traffic in the middle of the country, that was just exercising of free speech. When some hit soldiers and threw rocks at them, that was just a phys ed class gone awry. When they called Sharon a traitor, that wasn’t them, it was a government operative goading them. When their spokesperson said that their strategy was going to backfire, they didn’t let him embarrass himself any further and let him resign. When Sharon invited their leaders for discussions, they were very generous in spirit when they let the country know Sharon was pushing Israel to civil war.

Yup, those settlers are just fine.

And now we have another fine settler, Binyamin Regional Council head Pinhas Wallerstein, who is about to inform his constituents that they should do whatever it takes, including risking their lives, to prevent the pullout.

“Once they declare Gaza a closed military zone we will not clash with soldiers to get in, but we will certainly get there even if it means going through Palestinian cities while endangering our lives,” he adds. “If there is a need, we will not hesitate and we will lay our lives on the line to fight the evacuation.”

Claiming that the resistance to the disengagement would “significantly affect the future of the settlement movement and the State of Israel,” Wallerstein calls on opponents of the plan not to “shirk from their responsibility to exercise their civil and moral right to resist the destruction of the Zionist dream.”

Read all of it here, people.

edit for the self-righteous crowd: There are many settlers who will support the government’s actions in Gaza. They will do this out of their strong faith in Zionism, in a democratic Israel, in the process and authority of a freely elected government and despite their grave misgivings. I believe that the majority of the settlers belong to this camp and should be applauded and supported, even if we do it with tears in our eyes.