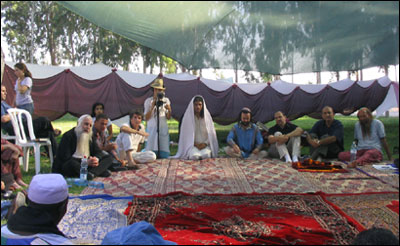 I went out to the Sulha for a few hours yesterday, the Utopian peace fest between Jews and Arabs. It was pretty much as I expected; a bunch of Jews struggling to come to terms with and admit the faults of our side, and a bunch of Arabs struggling to forgive us. After much dialogue and story sharing, it was brought up by several people in a circle of sheiks, rabbis, ex soldiers, ex terrorists and common folk that while we the Jews realize the sins of Israel from this forum, we don’t hear an acknowledgement of the sins from the other side. The answer from the Arabs took a winding path back through the faults of Israel never ended up actually addressing the question. Kind of disheartening.

There was also an ever-present film crew with ever-distracting boom mics constantly lurking as if our only purpose in being there was to prove that we were. The saving grace of the whole thing for me was that I got to spend time with my friend Dede (aka Haviva) and her new husband Yaacov. Dede works for Jews For Judaism and plans to make Aliyah next year to do Peace work.