Hamas and the Wart on the Nose

That’s right, our old friend with the combover, terrorist Mahmoud al-Zahar who is now the legitimately elected Palestinian Minister of Foreign Affairs, now has an international media platform. Recently speaking to a Chinese news agency, he said,

“I dream of hanging a huge map of the world on the wall at my Gaza home which does not show Israel on it,” he said. “I hope that our dream to have our independent state on all historic Palestine (including Israel).”

“This dream will become real one day. I’m certain of this because there is no place for the state of Israel on this land,” said al-Zahar.

Now, although the reporter is circumspect about this matter, there is no question that during the interview, she or he was unable to take her/his eyes off al-Zahar’s huge wart. 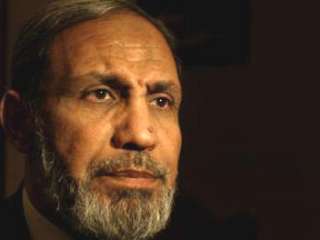 Yup, that’s the mother of all nose warts. It sticks out not unlike an Orthodox Jewish woman in a lineup at the Golden Pussy Bar and Striptease Club.

Indeed, it is there. It is vile. It is gross.

Now, don’t get me wrong, I realize this is a human being. I also realize that by focusing on his large nose wart, I am diminishing his essence as a human being. I could, for example, wax poetically about his love for the targeting and blowing up of innocent Israeli civilians. I could harp on and on like Lily Laskine (famous, deceased, amazing, classical harp player) about his denial of Israel’s right to exist or even of a genuine Jewish connection to the Land of Israel. I could speak to the fact that somebody probably calls him, “Dad.”

But I can’t. You see, I have trouble focusing on the person and what he has to say because that wart just sticks out at me. Its curvature, its slightly rough edges, its position just to the right potentially causing his entire face to slant rightward but in fact being balanced by the combover heading in the opposite direction (do Palestinian terrorists also have gay hairdressers?).

Yup, the wart overwhelms everything else about Mahmoud. Somewhere on that nose, there is a microbe giving a press conference to microbe reporters explaining that he climbed this wart “because it was there.”

But there’s more about the wart. You can see another, smaller one, near his eyebrow. I’m sure that this wart grew after the first. He was probably touching the mother wart one day and then somehow touched another part of his face where there was a little crack in the skin, et voila, new wart. He probably has one or two others hiding under that beard and perhaps new ones sprouting over his body. It’s a virus after all, and those are hard to kill. Does it just continue to grow and expand, slowly taking over the entire body? Does it suck up nutrients and blood that would otherwise go to feed other parts of his body? 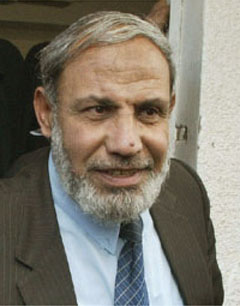 Hmmmm…that terrorist, Mahmoud al-Zahar – the legitimately elected Palestinian Minister of Foreign Affairs – is someone I just cannot see as a person. In fact, thanks to his wart, I visualize him as a walking wart with a body attached to it.

Hey, I know! Let’s call that body, Mahmoud’s body, “the Palestinians.” And the wart? Let’s call it, “Hamas.”

You have to feel a little sorry for the Palestinians and pray that soon they’ll head over to the pharmacy to get some wart-removal medicine. It doesn’t completely destroy the virus, but it minimizes its presence and opens the door to…peace.