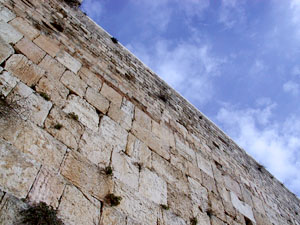 It seems that conservative prayer groups are being charged to pray near the kotel.

Given that mixed gendered prayer groups are a controversial issue, the conservative movement arranged a compromise in 1999 whereby their groups pray at different part of the wall, located in an archaeological site. The problem began in 2004, when the site started charging worshippers arriving after 8am the 30 shekel fee (about US $6.70) to enter the site.

The upside of course is that once they pay the 30 shekel sto get in, they don’t end up spending 50 shekels giving out tzedakka money to the highly persistent and intimidating kotel beggars.

Nonetheless, the Conservative movement has petitioned the High Court. I would also like to see someone petition the powers that be to finally take care of the hill that fell into the women’s section over a year ago, creating even less space in an already overcrowded atmosphere…but I guess that’s another post entirely.

My feeling is they made the compromise to move to a different part of the wall to respect certain sensitivities, even if those sensitives were forced on them, so hopefully the High Court can gem ’em season tickets to Robinson’s arch or something.