That wonderful title refers to an article in Slate which explains why in so many photos coming from Israeli’s front lines soldiers are seen wearing something that vaguely resembles chef’s hats.

(the floppy hats are called mitznefet (clown), and serve the purpose of both keeping out the sun, and makes it harder to recognize in a shadow or out of the corner of your eye.)

Nonetheless, why stop at soldiers? Anyone who has been in this country probably knows that you could add in any group and play “Israeli _______, Fashion Victims” and even have more fun. Someone with a little time on their hands should open up a Go Fug Yourself: Israeli Edition. 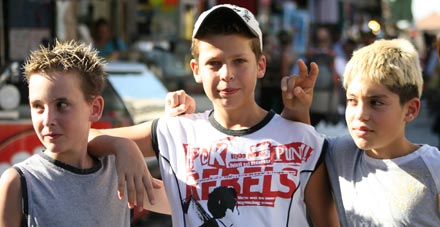 Arsim in the making. Note the frosted, over-styled hair.

It just boggles the mind. despite the fat that Israelis are quite easily one of the most beautiful people in the world, they yet Ye Old Average Secular Israeli continues to make fashion choices that could only be called a bad and ill-fitting version of Euro-Trash Chic. the oddly placed pockets and straps, the nonsensical silk screened phrases across too-tight t-shirts, the ubiquity of asscrack-revealing low-slung pants (especially among food service workers), it’s just wrong.

The only group I who I can say constantly have their fashion groove on are, interestingly, neo-hasidic Religious Zionists. They just have the whole hippy-peasant look down to a science. The settler-chic look has unfortunately worked it’s way out of my and many of my friends closets as the political statement associated with it began to deviate too much from our own.

Nonetheless, and in all fairness, sometimes the bad fashion here is a relief; I never have to be so concerned about what I’m wearing because truly, anything goes here. Hopefully the American Apparel store in Tel Aviv can start bringing a little hip, tasteful subtlety to this land of ours.