Staff Sergeant Michael Levin, 21, was laid to rest this Tisha B’Av afternoon on Mount Herzl in Jerusalem. Levin, who served with the Tzachanim (Paratroopers) was on leave and visiting his family in Philadelphia when the war broke out in Lebanon. He cut his vacation short, returned to Israel and re-joined his unit.

Last Tuesday, in the southern Lebanese village of Aita al-Shaab, he was killed in clashes with Hizballah gunmen. You can read more in the Jerusalem Post (where many of Michael’s friends seem to have congregated in order to leave messages of condolence to his family in the comments section), The Philadelphia Enquirer and The New York Sun. Haaretz has a great article about Michael and two other “lone soldiers” with families overseas who have perished in this conflict so far. 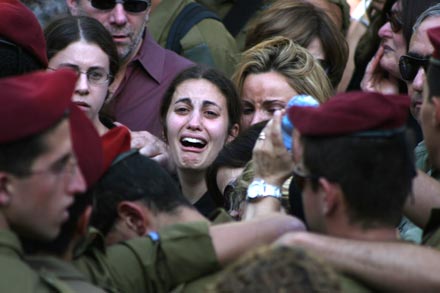 I didn’t know Michael but we had friends in common. Everyone described him as a great guy with a smile that wouldn’t quit. He was extremely personable and friendly as well as committed and persistent. I’m sorry I didn’t get to know him when I had the chance, and like all soldiers who have lost their lives in defense of the country, we are all diminished by his loss. Our Michael (who is joining the IDF in October), laya and I attended his funeral and our hearts go out to his family, fellow soldiers and many friends.

More pics from the funeral by clicking on the flickr tag below.

Blogs:
Life in Israel: The area on Har Herzl was packed with people. Most I am sure were like me, in other words people did not know him, but wanted to pay respects to such a gibor yisrael, who gave his life to protect us.

Wilderness City: His family was there in a strange nightmare coming off of the plane to their dead son and men in uniform commending him in a language they couldn’t understand. A lot of us came out not because we knew him, but because somehow, on a deeper level, we needed to know him. We were there for him? We were there for ourselves?

Am Echad?: ×‘×¨×•×š ×“×™×™×Ÿ ×”××ž×ª -May You be Comforted among the mourners of Zion and Jerusalem — but more than that, may you know that your son helped build Zion and Jerusalem so that we can live again as a free people in our land.

Sabra at Heart: I couldn’t be prouder of Michael, my fellow American and Israeli brother.