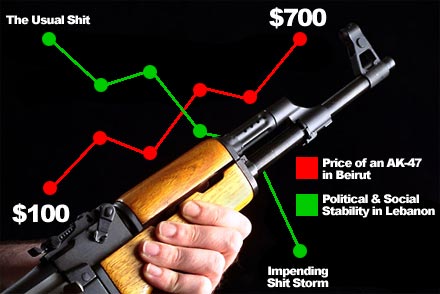 One of the early indicators of impending turmoil in certain unstable Middle Eastern countries is the street price of the Kalashnikov assault rifle, also known as the AK-47. This is most readily apparent in Lebanon, as pointed out by Ya Libnan:

The price of Kalashnikov in Lebanon is like an index of stability . The higher the price the higher is the instability and fear index … After the Hezbollah led political crisis sparked deadly Beirut street clashes last month between its supporters and those backing the government of Prime Minister Fouad Siniora, “everyone is looking for guns,” said an arms trade businessman.

In the wake of growing instability and the fear that Hizballah will train their weapons on Lebanese civilians, the price of AK-47s has gone up from $100 to a stratospheric $700-$750. A cartridge clip that used to sell for a mere $2 is now going for $20. People are smuggling the weapons in from Iraq via Syria by hiding them anywhere they can – under trucks, in car doors, in vats of tahini, you name it.

As always, instability begets instability. The more weapons are out there, the more likely they will be used and the more likely Lebanon will sink into further chaos and civil war. No one with any sense wants that. Perhaps the Lebanese people ought to follow the example of General Mikhail Kalashnikov who designed the AK-47 in 1947. In 2004 he quit designing guns and started a company where he designed Kalashnikov Vodka. Uh… I’d buy Hizballah Humus if it meant they got out of the shit disturbing business. Or Amal Arak… or whatever. Anyhow, lets hope things calm down over there. In the meantime, I’ll be checking the prices over at Akhbar’s House of AK-47s.