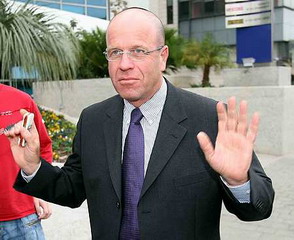 …or is he?
Avraham Burg had been given every advantage one could have in the State of Israel. Born in Jerusalem, his father Yosef Burg was a member of the Knesset for 37 years where he held numerous Cabinet positions. Avraham served in the IDF and rose to the rank of lieutenant in the much vaunted Paratroopers unit. A graduate of Hebrew University, he was also an activist with Peace Now and was injured in the grenade attack that killed Emil Grunzweig in 1983. In 1985 he got a job as an adviser to Shimon Peres and 3 years later he was elected to the Knesset as a member of the Labor Party. In 1995 he was appointed the head of the Jewish Agency and in 1999 he was elected speaker of the Knesset. In 2001 he ran for head of the Labor Party, and lost. Since then he’s left public life, had some shady and failed business ventures in Israel and then moved to France where he is now a “successful business man.”

Burg has recently received quite a bit of attention due to statements he made in an interview with the Ha’aretz Weekend Magazine about his upcoming book Defeating Hitler. In that interview, he said that

Burg calls Israel a “Zionist Ghetto” and wants the Law of Return repealed believing that it is “the mirror image of Hitler … I don’t want Hitler to define my identity.” He describes Israeli society as “paranoid” and believes that “the separation fence is a fence against paranoia…” He defines himself as a citizen of the world and describes Israel’s presece in the West Bank as an “Anschluss,” predicting “an infinite explosion.” He concludes: “The Israeli reality is not exciting. People are not willing to admit it, but Israel has reached the wall. Ask your friends if they are certain their children will live here. How many will say yes? At most 50 percent. In other words, the Israeli elite has already parted with this place. And without an elite there is no nation.”

I have no doubt that half of the children of Burg’s friends in Israel will abandon the country. They’re abandoning it already. We’re witness to the lack of “elite” representation in the prestigious infantry units that used to be the almost exclusive domain of the elite. Now, signing up for such units is left mostly to new immigrants, farm boys, religious Zionists and kibbutzniks – in other words, to the naive and ignorant idealists, the friars who don’t know better than to get their asses shot at by those hell bent on destroying Israel. And what of those elites? Historically, it’s been a mixed bag. On one hand we have Moshe Dayan who was a great general but who had no problem looting archaeological treasures and who was well known for his various sexual escapades. One might also recall Ben Gurion and the Mapai party’s implementation of what is known as Protektzia which provided cushy civil service jobs to political allies and kept otherwise qualified political adversaries from getting hired. But even in the old days there were some standards. Most Prime Ministers, regardless of ideological orientation, lived modestly:

Exposure for unethical behavior represented the ultimate disgrace and the end of a public career. Thus, when Housing Minister Avraham Ofer was charged with illegal activities (benefiting the Party), his shame was so great that it led him to commit suicide. And when Leah Rabin was exposed for maintaining a minor illegal foreign currency account, her husband felt impelled to resign as Prime Minister — a far cry from the response of politicians today.

Case in point? Avraham Burg! “The Labor party primaries also became corrupt as exemplified by the annulment of the ballot for the leadership between Avram Burg and Benjamin Ben-Eliezer because more Druze voters supported Burg than were registered in the party.” Burg also left the country under a cloud of suspicion when a privatization scheme he implemented led to a police investigation. This is nothing new of course – it seems as if we are met with a corruption scandal every day. Some see this as a bad thing – but I see it as a sign that Israeli society is no longer tolerant of the sorts of shenanigans that used to be taken for granted. The so-called “elites” who felt that certain privileges were their birthright are begining to feel the sting of public recrimination and this purging will ultimately be a good thing for Israel.

What’s funny is that even Burg’s analysis of what ails Israeli society is elitist. The focus of his criticism seems exclusively one sided as he berates the militarism and brutality of Israel’s defense efforts while not acknowledging the roles played by the Palestinians and the Arabs in creating the need for a firm and strong defense. Why is this “elitist?” Because it implies that the primitive Arabs cannot be expected to act rationally and in their own best interests.

So go ahead Avraham. Go contemplate Herzl and Achad Ha’am in France while selling your little shmattes. Maybe you could hire Yael Dayan, Dana Olmert, Aminadav Begin, Yigal Arens and all the other embittered sons and daughters of the Israeli elite. I mean ultimately, you’re right – Israel is a shitty little country. But with the departure of smug, entitled and self-righteous people like you, it’s becoming less and less shitty every day.

Allons enfants de la patrie… allons y! Get out and stay out!