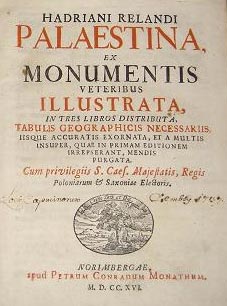 What would a free trip to Palestine in 1696 have been like? I’m sure you probably spent many a sleepless night wondering that very question. Well, wonder no more! Thanks to a recent book discovery in an antiquarian bookshop in Budapest, we now have answers to all our Birthright Palestine 1696 questions. The book, entitled Palestina ex monumentis veteribus illustrate documents a survey of the Holy Land made in 1695 by its author, Hadriani Relandi. Relandi, a geographer and a cartographer with a full command of numerous languages including Hebrew, Arabic and classical Greek, visited over 2500 biblically referenced sites in the Holy Land.

So what are some of the things we learn about Palestine circa 1696?

1. Not one place in Eretz Israel has a name that originates in Arabic.
Place names are Hebrew, Greek or Roman (Latin), that were given meaningless Arabic derivations. Akko, Haifa, Yafo, Nablus, Gaza or Jenin have no meaning in Arabic, and city names like Ramallah, Al-Khalil and Al-Quds lack historic or philological Arab roots. In 1696, the year of the survey, Ramallah was called Bt’ala (=Beit-El), Hebron was Chevron, and the Cave of the Machpela was Al-Khalil, Arabic for patriarch Avraham.

2. The country was a wasteland. Its few inhabitants were concentrated in cities like Jerusalem, Acre, Safed, Jaffa, Tiberias and Gaza. Most of the city folk were Jewish or Christian, and only a few Muslims, usually Bedouins. Nablus (Shechem)was an exception, home to some 120 Muslims and 70 Shomronim (Samaritans). Natzeret (Nazareth), capital of the Galilee, was inhabited by 700 Christians. Some 5000 people lived in Jerusalem, most of them Jews. Interestingly, Muslims are mentioned only as nomadic Bedouins, who served as seasonal agriculture and construction workers. The population of Gaza was equally divided between Jews and Christians. The Jews raised grapes, olives and wheat crops (Gush Katif), while the Christians were occupied in commerce and transportation of goods. Safed and Tiberias also had Jewish communities, but the only occupation mentioned is fishing in the Sea of Galilee. A city like Um-al-Fahm, for example, is mentioned as a small village consisting of 10 Christian families, with a small Maronite church.

3. Relandi’s book completely refutes postmodern theories about a Palestinian nation or a “Palestinian tradition”, and reinforces Jewish ownership of the land, to the total exclusion of the Arabs, who even stole and adopted the Latin name of Palestine. 700 years of Arab rule in Spain, for example, have left a real cultural Moorish legacy of literature, architecture, engineering, medicine and the like. Andalusia and Guadalajara are undeniable facts, whereas in Israel, there is nothing that is Arab: no city names, no culture or art, no history, and no evidence of Arab rule. There is only a legacy of violence and robbery of the Jews’ promised, most sacred land.

Granted, some of this analysis is a little harsh. Say what you will about Palestine in 1696, but today there exists a clearly defined Palestinian national identity. OK so it’s very fractured and is often superseded by religious, political and clan-based affiliations, but one can’t deny its existence. The discovery of this book however ought to put to rest any notions of a clearly defined Palestinian historical connection to the land etc. Of course we ought to come to some peaceful agreement, but it ought not be based on historical fallacies – it ought to be based on historical realities as they exist today and now. The Palestinians exist and they’re not going anywhere. We exist and we’re not going anywhere either. Chuck self-righteousness out the door and deal with reality. I’ll be waiting – ready when you are!

The original article appears here in Hebrew for those of you who read Hebrew. As to the rest of you, the article could be about honey based recipes for the new year as far as you would know (Thanks MSN! Please ignore the recipe for Honey-Soy Glazed Pork Chops) …