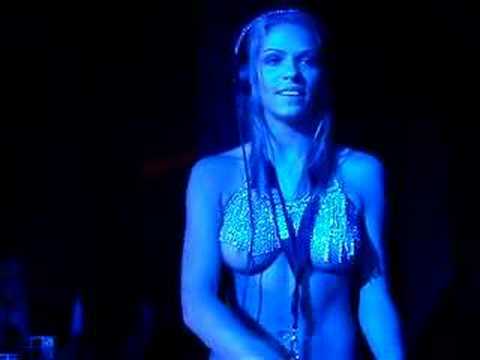 Now I’m sure these are all fine and talented women, but let’s face it… they are hired mostly for how they expose their 38 Double Ds rather than how they spin their 33s. And the music? It’s eclectic but mostly bad house and/or euro-pop. They are hired to impart a faux hedonistic groove to what are in all likelihood otherwise lackluster events.

So when Axe, the Maxim of personal grooming products, hired a bunch of Israeli goombah producers to throw a promotional party in Tel Aviv, they figured they could just buy hedonism. They hired a mess of scantily clad Israeli party gals (glorified strippers) and of course a topless DJ – Nikki Beluci. I’m sure they hoped to come off as sexy, sophisticated and cutting edge. Well, it wasn’t sexy. It was tacky and unsophisticated and about as cutting edge as my nephew’s kindergarten scissors (just like parts of Tel Aviv!). It was a party for a product you use on your armpits fer cryin’ out loud. Hedonism is not for children like you.

Nikki performed in a scanty, revealing outfit, covering her nipples with tassels whiled the hired bimbos and himbos pranced around wearing next to nothing and slathering their bodies with Axe product. So what’s the problem? Axe is owned by Unilever – a company that owns a number of brands like Hellmans Mayonnaise, Bertoli Olive Oil, Dove, Lux Lipton, Sunlight, Vaseline etc. And who is the sector of Israeli society that buys most of their product, many of which are certified kosher? That’s right – Haredim. Haaretz reports that certain Rabbis didn’t look too kindly on Unilever’s cheesy little party. Kol Hai radio announcer Mordechai Lavi stated:

They need to be taught that anyone using callous, cheap and substandard advertising techniques for their products will be rejected by the community. Their apology and clarification should be done through secular media, to make sure that no others will follow suit.

More importantly, the Haredim are positioning themselves as arbiters of good taste in general, not just in relation to the religious community:

Rabbi Gabriel Papenheim, who chairs the Kashrut Committee for Badatz, told TheMarker that the matter was initially to have ended with their apology, but Badatz is now demanding that an apology also be published in the secular press. “The insult was to the secular community no less than to us,”

Now, when dancing female children were forced to wear burka like outfits at the opening of the new Jerusalem Light rail bridge because of Haredi pressure, that was too much. But in this case, I am fully in agreement with Badatz. That party was ridiculous. Here’s the video care of Layla.co.il. It’s not safe for work, contains nudity, skeevy guys and bad house music which some might find offensive. Also you will in all likelihood want to take a shower immediately after watching it. Just so you know…

The only thing the promoters did right was to include Jerusalem band Terry Poison on the bill. Of course, since the girls of Terry Poison did not perform topless, the video report by Layla totally ignored them. 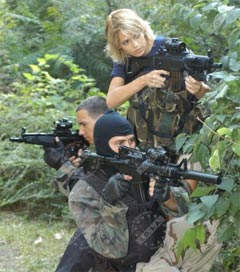 UPDATE:
Did I say or imply anything disparaging about DJ Nikki Beluci? Clearly y’all know I was totally kidding right? She is obviously a highly skilled turntableist regardless of how skeevy the people that hire her may be. DJing is a tough male dominated business and a girls gotta do what she can to break in. Oh, and over to the right is a picture of Nikki at IOSA – The Israeli Operation Security Academy in Hungary, undergoing specialized weapons training. Check out the site, there’s a mess of pics of Nikki with all kinds of high caliber weapons.

Hat tip: Joel Katz and the religion and state in Israel blog.

Hat tip to Nabokov, a commenter on Judapest.org who found those pics of Nikki undergoing body guard training.