Expectations from Sderot: The Hellish Nightmare of Raining Rockets Continues 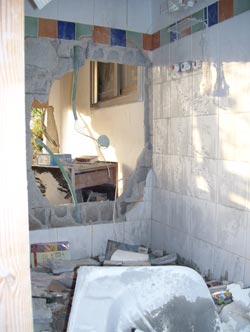 December 19 is a significant day for Israelis civilians living on the other side of the Gaza Strip.

It is the day where the Hamas-Israel ceasefire officially comes to an end and the question to whether Palestinian rocket fire will resume on Israelis civilians living in the south, will officially be answered.

The question has been answered–to some degree–a little earlier than expected. After Israel entered the Gaza Strip to blow up a Hamas dug tunnel intended for the killing or kidnapping of Israeli soldiers, Hamas fired a massive barrage of rockets-over 60–upon Israeli civilians through November 4-5.
Several more Palestinian rockets were fired at Israel throughout the past week, with a barrage of Qassam rockets fired at Sderot and the Eshkol region on Sunday, November 16 and Monday, November 17. The ceasefire to this effect has been violated, two and a half weeks into November, more than 80 times by Hamas with the firing of over 80 Qassam and mortar rockets at Israelis civilians living in the Negev.

But the firing of Qassam and mortar rockets are not the only violations carried out by Hamas during the course of this ‘ceasefire.’ While bomb shelters and other forms of protection have emerged alongside Sderot homes and playgrounds, Hamas has engaged and supported the rearming of its army, production of rockets, smuggling money through tunnels, and training its soldiers for combat and abducting hostages.

It is clear that on Hamas’s end, the aftermath of the ‘ceasefire’ is one that entails the continued terrorizing of Israeli civilians in Sderot and the western Negev.

As early as July 2008, a month into the ceasefire, Palestinian terrorists continued producing rockets and conducted training exercises for newly recruited militants. In a rare video obtained by Reuters back in July, Palestinian militants of the Popular Resistance Committee (PRC) are shown preparing and stockpiling rockets for future use against Israel. The video shows masked Palestinian gunmen stirring explosive material against the backdrop of newly made rockets.

According to the IICC, Hamas has thousands of rockets in stock, ready to be fired at Israel ‘s Negev cities and communities.

In another video, released also in July by Hamas and reported on by Haaretz, Hamas operatives are seen participating in advanced military training exercises in the southern Gaza Strip, the area in which the Gush Katif settlement block was located before Israel’s 2005 disengagement from the area. The Palestinian militants are seen practicing military maneuvers learned in combat training in Iran.
In addition to training Palestinian soldiers, Hamas invested its energies during the ceasefire to train young Palestinian children to hate Israel and the United States in a special parliamentary summer camp. According to Haaretz, the summer camp’s main objective was to train these young Palestinian children to become future militants.

Palestinian women in Gaza were also not forgotten. Dozens of women in the Gaza Strip also underwent military training, primarily in combat and suicide missions. During the ceasefire, Hamas and Palestinian Islamic Jihad allowed a Lebanese TV correspondent to film and interview women terrorists. According to the IICC, the women are trained for both offensive and defensive maneuvers. On a defensive scale, these Palestinian women are trained to fire small arms, launch rockets throw grenades, and attack IDF soldiers, as well as blow themselves up near IDF soldiers using explosive belts.

In the past, Hamas, the PIJ and Fatah have used women to carry out suicide bombing attacks in Israeli territories and attack IDF soldiers during operations in the Gaza Strip.

In August, PRC operatives invited CNN and other network reporters to Gaza, for an exclusive video interview and photo-op of the progress made in their ongoing rocket production. The PRC presented a new advanced form of rockets called Nasser-4, which can travel up to 16 miles ( 25 kilometers ). The extended distance enables the rockets to reach Ashkelon, which has a population of 120,000 and Ashdod, which has a population of 200,000.

The PRC also revealed in the video, Palestinian operatives training to conduct raids on Israeli army bases and capturing Israeli soldiers. Indeed, the PRC was one of the Palestinian terror organizations behind the abduction of Gilad Schalit two years ago.

While international community may not consider these videos as blatant evidence for serious ceasefire violations, the videos do make it clear that Hamas and other Palestinian terror networks are continuing to construe a terrifying reality for Israeli children and families living along the Gaza border, and as far away as Ashkelon and Ashdod.

SO will Palestinian rocket fire resume on Sderot after December 19? It is a reality which Hamas and other Palestinian terror groups have been preparing for since the ceasefire began. These terrorist groups have had no qualms in making their preparations publicly known to the international world and Israel. After all, it is the children of Sderot and the Negev, not the politicians and Israeli Knesset members, who are forced to wait until the rocket fire resumes again.

Since early November, residents of Sderot and the western Negev have been awaken almost every morning to the sound of the Red Alert siren followed by a rocket explosion between two o’clock to three o’clock in the morning. These Palestinian groups are simply offering Sderot residents a taste of what is to come, and at the same time aiming to recondition Negev Israelis to life under sirens and rocket explosions.

Unfortunately, it is only a matter of time before Palestinian rocket fire becomes part of the daily and nightly routine of Sderot and western Negev residents. Hamas and other Palestinian terror networks have made it clear that they will strike Israeli civilians with massive Qassam and mortar rocket attacks, when it strategically suits them to do so.
Visit www.sderotmedia.com for the latest videos of Sderot.