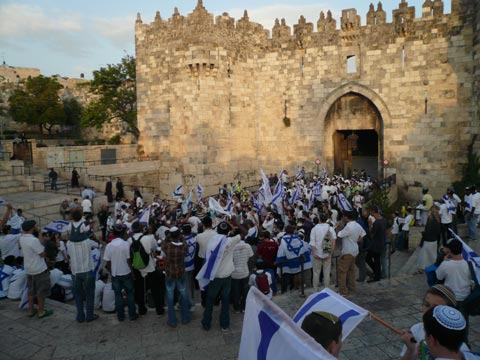 Well, in case you thought Bibi Netanyahu reads Jewlicious and was convinced by my suggestion that Jerusalem can be divided with the Old City becoming an international protectorate, think again.

Today he announced, as have all previous Israeli PMs since 1967, that Jerusalem is indivisible and shall never be divided again. Never ever. Not even a little bit.

Jerusalem was always ours and will always be ours. It will never again be partitioned and divided.

Only under Israeli sovereignty will united Jerusalem ensure the freedom of religion and freedom of access for the three religions to the holy places.

Of course, Ehud Barak made similar assertions and he ended up offering half of Jerusalem to the Palestinians (although there is some question as to whether at Camp David he actually offered sovereignty over the eastern part of the city).

Still, Netanyahu’s statement does give us a clear status check. Now let’s see whether he has the balls to build out E1, the area that connects Jerusalem to Ma’aleh Adumim.