What do Bush and Hamas have in common?

A total failure of Palestinian leadership 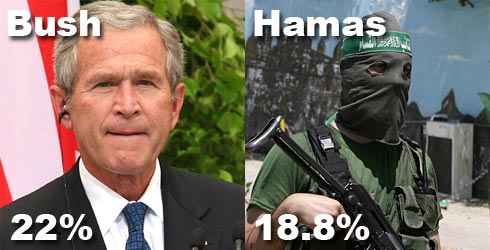 When George W. Bush left office, he did so as one of the most unpopular departing presidents in US history with a 22% approval rating. Oddly enough, at 90%, he also enjoyed one of the highest approval ratings of any US President in history, in a poll taken shortly after 9/11. Meanwhile in Gaza, in what has been described by Eyad Sarraj, an independent Gaza politician and human rights activist, as a “total failure” of Palestinian leadership, a June 29 poll indicated that support for Hamas in Gaza and the West Bank fell to 18.8%. The low numbers were attributed to Israel’s month-long offensive against Hamas, the heightened economic blockade of Gaza, Hamas’ strong arm tactics against it’s people, Hamas’ extremist rhetoric, and the effects of the political gyrations in Iran. Well, all that and the fact that Palestinians seem to be waking up ton the fact that Hamas is simply not good for the people of Palestine. And that they’re douchebags. And that they probably snorted coke in college.

So what’s going to happen? Will Hamas sink Gaza into further isolation or will these developments spur Hamas to seek peace? I don’t know but the historical record of Palestinian leadership has never been one of stellar achievements. Oh well.