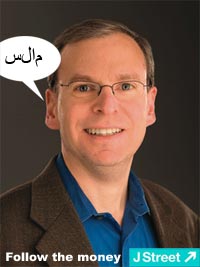 I could not help but gush at the recent news that showed how effectively J-Street, the peace loving, pro-Israel alternative to AIPAC, has managed to bridge gaps between Arabs and Jews. This heart warming news was reported by the Jerusalem Post after perusing J-Street’s Federal Election Commission filings:

The J Street political action committee has received tens of thousands of dollars in donations from dozens of Arab and Muslim Americans, as well as from several individuals connected to organizations doing Palestinian and Iranian issues advocacy…

J-Street has raised a whopping $111,000 so far this year and its contributors include Finance Committee members ($10k minimum contribution) Richard Abdoo, a current board member of Amideast and a former board member of the Arab American Institute, and Genevieve Lynch, who is also a member of the National Iranian American Council board. The Jerusalem Post also notes smaller contributions by representatives of the Saudi Government, members of the State Department, several leaders of Muslim student groups, Saudi- and Iranian-born Americans, and Palestinian- and Arab-American businessmen. Kudos go out to J-Street for bringing these disparate voices together in support of it’s staunchly pro-Israel agenda!

And J-Street isn’t just about building bridges. No sir. J-Street is also about helping friends out. Remember that poll back in March 2009 commissioned by J-Street? You know the one that showed how American Jews were surprisingly supportive of J-Street’s agenda? The poll administered by the firm of Gerstein | Agne? Well, it turns out that Jim Gerstein, principal at Gerstein | Agne is, according to J Street’s 990 IRS form, J-Street’s Vice President. Gerstein’s presentation on J-Street’s Web site as an impartial analyst is probably a reflection of his humility and has nothing to do with perceptions of impartiality that may arise should that information become more apparent. Whatever the case may be, it is clear that Gerstein is a friend of J-Street and vice versa, and again, I am touched by this wonderful example of friends helping friends. Gerstein gets a nice high profile gig and J-Street gets rigorously administered polls and analysis. OK, so the numbers don’t quite mesh with other impartial polls, so what? What are you trying to say? Why must you be so cynical??