Jon Stewart in a Misguided Moment of J Street Envy? 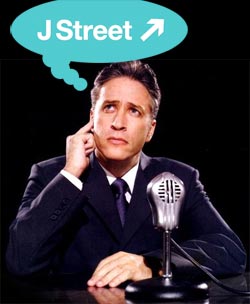 How else to explain his recent interview with Anna Baltzer and Mustafa Barghouti? Clearly Stewart wanted in on the whole peace, love and understanding thing going on over at the J Street conference, so he invited the very telegenic Anna Baltzer, author of the book Witness in Palestine: journal of a Jewish American woman in the occupied territories and the granddaughter of Holocaust refugees. Which of course gives her a greater insight into the truth. But I digress. Mustafa Barghouti was a candidate for the Presidency of the Palestine Authority in 2005, finishing second to Mahmoud Abbas, with 19.8% of the vote. Barghouti was also Minister of Information in the short-lived Palestinian unity government of March-June 2007 where his greatest accomplishment was effectively killing off Farfour the Mouse, ahead of legal action by the Disney Corporation. He is currently the General Secretary of the Palestinian National Initiative, a political party that seeks to further political reform, eliminate corruption while supporting peace with Israel based on two states with a Palestinian state in all territory occupied by Israel in the 1967 Middle East war, a capital in Arab East Jerusalem and rights for refugees.

What’s noteworthy is that Baltzer is more anti-Israel than Barghouti, who does not come off as anti-Israel at all. While voicing strong support for non-violent resistance and the BDS movement, she could not, after being repeatedly asked by Stewart, say that she supported the right of the State of Israel to exist. Barghouti on the other hand, had no problem stating his recognition of this right, although his relatively moderate views haven’t helped him much with the electorate and while he is respected, he’s basically nobody. In fact, so is Baltzer. Her book is 3 years old and she makes a living because certain audiences can’t get enough of Jews with Holocaust survivor parents or grandparents talking about what a shitty country Israel is. Baltzer, who is a graduate of Columbia University and a Fulbright Scholar, is basically a “hot babe” version of failed academic Norman Finkelstein. Much, much easier on the eyes, but just as one sided, intellectually dishonest, fundamentally flawed and kind of demented. Barghouti seems like a very nice, sincere man but like Baltzer, he exists on the fringes, with little or no support amongst his constituents.

So why invite these two to The Daily Show? Because of the J Street zeitgeist and because it might lead to a partnership that could result in “a hilarious buddy cop movie.” Sigh. The extended segments from the Daily Show can be viewed after the bump. That means click on the “more” link dummy.