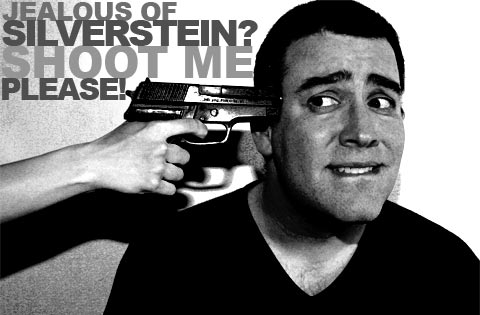 I know most of you don’t care about Richard Silverstein’s most recent screed against me, but… but… he called me mean!! And… and… he said I was jealous of him! So let’s just put it on the record that should I ever express any jealousy towards Mr. Silverstein, please, I urge you to put me out of my misery and put a bullet through my head.

A more detailed analysis after the bump!

So yeah, Richard Silverstein is at it again. The man who is at once the defender of decency, the bane of all bullies and also the most indecent bully out there, took umbrage with something I wrote. He said I was mean – the king of mean even! And he repeated his Abitbol-is-a-liar mantra that he is so fond of. Also, I’m disgusting, a scoundrel, cruel, vicious, brutal and on and on…

He was upset that I called him old and decrepit. My Dad is 20 years older than Silverstein and he shares none of these traits? Why? Because decrepitude is not just a physical attribute, it’s state of mind and never has an adjective been more appropriate. But Silverstein has serious comprehension issues when it comes to the English language. For instance, he states quite clearly that Israeli singer Noa accused Hamas “of acts of rape and other heinous crimes which were baseless accusations.” What did Noa say?

I see the ugly head of fanaticism, I see it large and horrid, I see its black eyes and spine-chilling smile, I see blood on its hands and I know one of its many names: Hamas. You know this too, my brothers. You know this ugly monster. You know it is raping your women and raping the minds of your children.

Now please raise your hands if you think that Noa was saying that members of Hamas literally rape their women and children? OK, thanks, you can put your hand down now Richard. Everyone else with the most basic English comprehension skills knows that she was speaking figuratively.

We see this same messed up perception when he uses the term “liar.” Many people who he disagrees with are called liars. Not “mistaken” or “wrong” but rather outright liars. Go ahead do a search on the use of that term on Silverstein’s site. You’ll quickly see what I mean. It’s like when he calls me a liar for expressing my opinion that he is anti-Israel. I feel I have valid grounds for my opinion and thus I am not by definition a liar. But you know, such “subtleties” are not Silverstein’s strong suit. Everything can be put aside in the name of fulfilling his craven agenda which has more to do with arrogant self righteousness and self aggrandizement than it does with actually forging a path to true and lasting peace in Israel. Tikkun Olam my ass.

So this is what I have to be jealous of? This person who is the veritable personification of moral decrepitude? This bitter man who couldn’t analyze his way out of a paper bag? This self styled pro-Israel Zionist who never has a good thing to say about either Israel or Zionism as he sits in his unemployed glory spewing venom and schnorring for a friggin’ $25 web cam?? Yeah, the day I’m ever jealous of that, please put me out of my misery. Please shoot me.