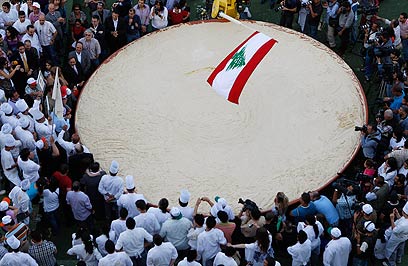 By pouring the contents of an incredibly huge bowl of hummus into the Jordan River?

I’m not sure what else anybody could be doing with more than eleven tons of hummus – other than setting a new world record in an ongoing childish debate whether hummus is an “Arabic” dish or typical of Israeli cuisine, which previously resulted in a world-record size serving of hummus on each, the Lebanese and the Israeli side.
I’m still waiting for eight metre-diametre falafel balls and a 300 squaremetre pita or the quarter-mile shish kebab. (Even though this might draw me some hate, hummus ranks among the top blandest foods I’ve ever tried. Why not quarrel about something more tasty?)

The achievement more than doubled the previous record — set in January in the Arab-Israeli village of Abu Gosh.

The January dish weighed in at more than 4 tons — the same as four average family cars.

And just because this was so much fun: