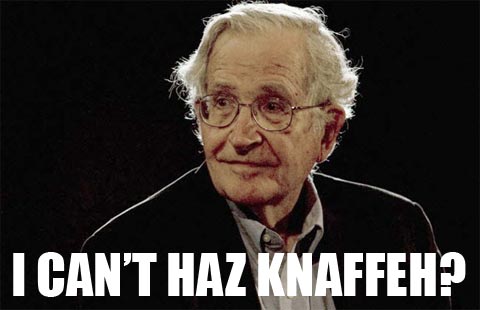 Noted linguist and far left activist Noam Chomsky can’t haz Knaffeh as he was denied entry into the Palestine Authority by Israel’s Ministry of the Interior. Chomsky was supposed to give a lecture at Bir Zeit University in Ramallah at the invitation of Palestinian Authority member of Parliament Dr. Moustafa Barghouti. He was detained and questioned at the Allenby Bridge crossing for 3 hours and then sent back to Jordan. Haartez reported that:

In a telephone interview with Channel 10, Chomsky said the interrogators had told him he had written things that the Israeli government did not like. “I suggested [the interrogator try to] find any government in the world that likes anything I say,” he said.

Chomsky is particularly notable because he is a Jewish-American academic who is amongst the most well known and vociferous critics of Israel. Chomsky has also in the past justified the development of nuclear weapons by Iran:

Speaking at Harvard’s Memorial Church on Saturday, March 6th, Chomsky critiqued the foreign policy of President Obama ’91 and explained the historical reasons that Iran would perceive a need to develop nuclear weapons. â€œIf they’re not developing a nuclear deterrent, they are crazy.â€ The problem, said Chomsky, is the defiant and hypocritical insistence of the United States on holding the constant threat of military action over Iran as a punishment for its noncompliance with United Nations mandates. â€œHostile actions of the United States and its Israeli client are a major factor in Iran’s decisions of whether or not to develop a nuclear deterrent.â€

While hosted by Hezballah in Lebanon in 2006, Chomsky stated that an armed Hezballah is justified as a deterrent against potential aggression. One month later, Hezballah started lobbing their “defensive” missiles at Israel, prompting the start of the 2nd Lebanon War.

I think Chomsky’s politics are not only detestable, they’re also intellectually dishonest and one sided. I know this because I’ve seen him speak several times and have read much of what he’s written. I’m not keen on Israel barring anyone from merely speaking, even at a campus as politicized and radical as Bir Zeit. Had he chosen to speak at an Israeli University, I likely would have attended. However, I do recognize that speech can act as an incitement to violence so I can understand the reasoning behind the Ministry of the Interior’s decision to bar Chomsky’s entry. Such decisions are made all the time by Western, Democratic countries and Israel is no different than them in that respect. So bottom line? I’m opposed to Chomsky’s denial of entry but I kind of understand the presumptive reasoning behind it. I look forward to the government’s public justification.

UPDATE: Will cooler heads prevail? According to the Jerusalem Post, Chomsky’s denial of entry was a misunderstanding and the decision might well be reversed. That would be good. We have nothing to fear from old man Chomsky, an old-skool radical activist who never met a 3rd world Dictator he didn’t like.