Shame in the Knesset: MK Hanin Zoabi Shut Out 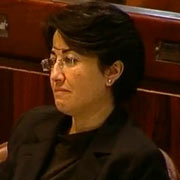 For those of you who don’t speak Hebrew, what the video above shows is a distasteful spectacle whereby Israeli members of Parliament act like bat shit crazy street hooligans. Why? Well, one of the participants in the fauxtilla was an Israeli MK, Hanin Zoabi. A member of the National Democratic Assembly (Balad), Hanin has been very critical of certain aspects of Israeli society. She has called Lieberman, Netanyahu and Livni “fascists,” she does not support the idea of a Jewish State and she has supported the acquisition of nuclear weapons by Iran. Suffice it to say that Zoabi and I have a number of things that we disagree on.

And yet? I was disgusted by the display put on by the Knesset when Zoabi returned from her trip on the fauxtilla. Having opinions many of us disagree with does not make one a traitor. Not wanting to listen to Hatikvah (a song I love) does not make one a traitor. I don’t care what Likud MK Miri Regev says, or in what language she says it in. Israel Beiteinu MK Anastassia Michaeli had to be restrained and escorted out, such was her fury and anger (ok so someone yelled at her and told her to go back to Russia, but still.). Speaker of the Knesset Reuven Rivlin tried to maintain control but despite everything, MK Zoabi, a democratically elected member of Israel’s Parliament was shut out by childish and undignified Parliamentarians representing the full spectrum of Israel’s right wing.

Adding further to the shame, was MK Zoabi’s outing as a, well, let’s just say that it’s unusual for a smart and educated woman in her milieu to be 41 and still single and unmarried. Not nice and totally not appropriate. No wonder she was brought to tears. I know the Knesset is a rough place. I know MKs often yell and scream at each other and call each other names all the time. But after one PR disaster this week, did we really need to see this spectacle? This political and macho posturing by a bunch of angry members of the government, taking out the frustrations caused by their own fuck ups at some little MK?

Again, let me add that regardless of their intentions, the fauxtilla was an attempt to break the embargo. It was an attempt ultimately to help Hamas get more unimpeded weapons deliveries from Iran and strengthen their stranglehold on Gaza. But we need to respect our democratic institutions and our politicians need to learn the value of dignity and restraint. On behalf of myself and all decent Israelis, I’d like to extend my apologies to MK Hanin Zoabi.