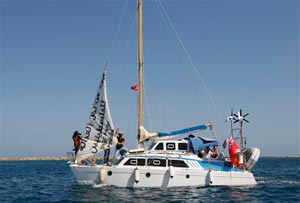 Irene set to land within 24 hours

Originally set to depart in July, but delayed by a $28,000 budget shortfall, the Irene set sail from Cyprus, destination Gaza. On board are 9 Jewish activists and crew members as well as a “symbolic” humanitarian cargo of toys, fishing nets and prosthetic limbs. Why is it symbolic? Well, because the Irene is a 33 foot Catamaran. With 9 people on board, there’s just not a lot of space for cargo. In this case “symbolic” simply means “not a whole hell of a lot.” Which is too bad really. Even a basic, used, 10 year old 33 foot Catamaran can cost upwards of $120,000. Add to that the travel costs of getting the passengers to the boat and all other associated expenses and it’s clear that this isn’t a humanitarian mission whose aim is to ease the suffering of a besieged and impoverished population. The money could simply have been donated to any of a number of reputable NGOs working in Gaza. No. This is simply a PR stunt put on by the sponsor organizations taken straight out of the Anti-Israel Activism for Dummies Handbook, chapter 1.

Lets look at the Jews on the boat. Why we have none other than Yonatan Shapira, co-founder of Combatants for Peace and an IDF refuser. Yonatan achieved a bit of notoriety this summer after he vandalized remnants of the Warsaw Ghetto wall by spray painting them with the message “Free Gaza and Free Palestine” as well as “Liberate all Ghettos.” Despite his blatant comparison of Israel with Nazi Germany, Shapira asserted that “I am not saying there is a comparison with the monstrosity of Nazi death camps, but I am saying we must talk about the silence in Israel and the world when people are confined in a ghetto-like place.” And just to drive the point home that this humanitarian mission has nothing to do with comparing Israel to Nazis, the organizers saw fit to include Holocaust survivor Reuven Moskovitz and Lilian Rosengarten, a refugee from Nazi Germany. I can already hear the maudlin sound bites.

This reminds me of how in his early speaking tours, Norman Finkelstein would shlepp his decrepit Mother to speaking engagements. After Finkelstein would finish, she would get up, feigning spontaneous indignation, and announce that not only was she a Holocaust survivor, but that what Israel was doing to the Palestinians was worse (!!) than what the Nazis had done to the Jews. It’s very dramatic of course and the message is quite compelling. It’s genius really, using the Holocaust as a weapon against the Jews, but it’s complete bullshit. Not only that, it’s craven and despicable and will not help the Palestinian cause one bit. But then again, this exercise was never about actually helping the Palestinians, was it?