Christmas in Bethlehem 2010: No Crosses! 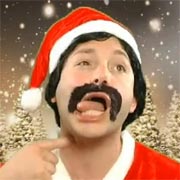 Caroline Glick’s Latma TV has been ripped to shreds in the past for its less than politically correct videos that often take the piss out of the Israeli/Jewish left and Muslim extremists. OK so these are the same people that love it when Jon Stuart excoriates the right or when Eretz Nehederet pokes fun at Israeli foibles. Me? I enjoy any valid political discourse, especially when it’s funny. But what do I do about this Jihad Bells video? Is it funny? Is it offensive?

Well… I guess it would be offensive if it did not reflect reality. However… it seems one of the victims of the rise of Islamic fundamentalism seems to be the Christians of Bethlehem, the birthplace of Jesus. The Christian population has been in massive decline for years and lest you wish to place the blame on the Jews, allow me to present this recent story wherein Samir Qumsieh, director of the Catholic television station Al-Mahed Nativity TV in Bethlehem is interviewed about the state of Christendom in the Palestinian territories.

This Christmas in Bethlehem, the cross has been banned from souvenirs for tourists and pilgrims in the Holy Land. Some textile workshops in Jerusalem and Hebron have begun to print and sell T-shirts depicting the Church of the Nativity in Bethlehem without the cross. Because of the growth of Islamic fundamentalism in the Palestinian territories, the cross was also removed from t-shirts of football teams. Interviewed by AsiaNews, Samir Qumsieh, journalist and director of the Catholic television station Al-Mahed Nativity TV in Bethlehem, said: “I want to launch a campaign to urge people not to buy these products – he says – because the removal of the cross is an intimidation against Christians, it is like saying that Jesus was never crucified. “

Qumsieh points out that from 2002 to 2010 the Christian population of Bethlehem has dropped from over 18 thousand to 11 thousand people. In Gaza, after Hamas came to power in 2006, Christians have fallen by about 3,200 units, from 5 thousand to less than 1800 in 2010. Only 15,400 Christians (2% of the population) live in Jerusalem, as reported in a study by the Jerusalem Institute for Israel Studies. They are 50% less than the 31 thousand registered residents in 1948, when Christians accounted for 20% of the population of the city… The reporter says that if this exodus continues there will be no more Catholics in the Holy Land and that one day the Church of the Nativity could be turned into a museum. “If there are no more Christians in the Holy Land – he says â€“ then there will no longer be Christians anywhere.”

So… yeah. Merry Christmas from Jerusalem to whatever Christians are left here. Score one for Caroline Glick?